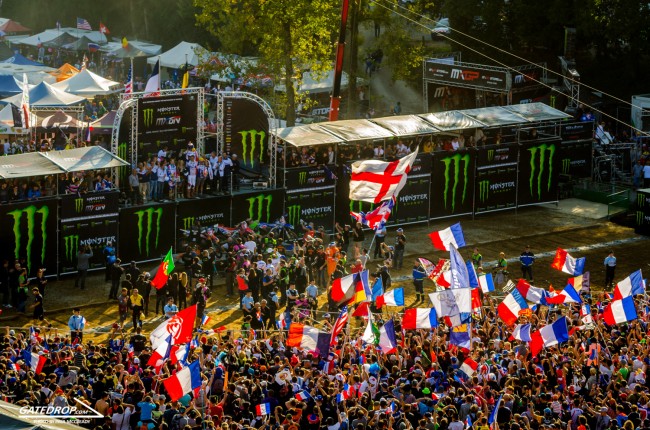 Andy McKinstry: The Motocross of Nations is fast approaching, it’s hard to believe that we are here already and the motocross season is nearly over. What country is going to shine this weekend? Disaster has already struck for Belgium, I had them as favourites but Desalle has been ruled out for the event. Without Desalle they will be doing well to get on the podium. Strijbos has speed and will be good if he gets good starts but at times is a bit unpredictable. Van Horebeek will be strong in the MX2 class and Brent Van Doninck will experience his first Nations event on the 450. Brent is a rider for the future and it will be good for him to gain experience from the Nations.

Due to Desalle’s injury I see it being a two way between America and France for the Nations win. There is nothing wrong with Romain Febvre and Benoit Paturel’s speed but they suffer from very bad starts and that is where this event could be won and lost, I hope they have been practicing their starts. Gautier Paulin hasn’t been riding too well lately but the second moto in Glen Helen was much improved. A lot of people doubted the French team that got selected for Latvia but they won there so never under estimate the current French generation.

I personally think America will be too strong this year and finally win the event again. However, it’s Jason Andersons first time representing the event and Alex Martin has never been amazing at the Nations so France need to hope they collapse with the pressure. I think they will win the event but will an American actually win a moto? Cooper Webb has the best chance for sure so never rule him out.

There are a lot of countries that will battle for the third spot on the podium. You can’t rule out Belgium, GB, Switzerland or Holland. I think Holland could steal that third position as they will have Herlings, don’t be surprised to see him win an outright moto!

When it comes to the individual results it could get interesting! I see MX1 between four main men. Romain Febvre, Tim Gajser, Antionio Cairoli and Copper Webb will all be strong. Another rider that can’t be discounted is Max Nagl. I am going to give the edge to Romain Febvre but don’t be surprised to see any of those five riders do the business this weekend.

The MX2 class will be very interesting and honestly it’s going to depend on the starts, any of the top guys can’t afford a bad start because it’s going to be tough passing the 450 riders. Jeremy Van Horebeek will have the speed to win but I think starts could let him down. We have saw a new Jeremy Seewer in 2016 working with Stefan Everts, I just about give him the edge on Max Anstie, Alex Martin and Benoit Paturel.

In the open class I just can’t look past Jeffrey Herlings, I can’t wait to see him on that 450! Like I previously said don’t be surprised if he wins an outright moto, he has the speed for sure. I’m not convinced that anyone else in the open class are capable of winning a moto but don’t count out the likes of Gautier Paulin, Jason Anderson, Arnaud Tonus and Evgeny Bobryshev who could run at the front.

Jonathan McCready: I originally had Belgium as the favourites until Clement Desalle got injured at Glen Helen but the landscape has now changed and for me it will come down to France or USA. Which one will win? It’s hard to say, it could come down to starts v pressure. Can France get the starts to put the American rookes Anderson and Martin under pressure – and can the rookies handle it on a slick track they aren’t used to?

America have such an advantage at this race it is hard to believe they could lose again, especially with the French not known for their starts. With good starts and a lot of pride it could be the USA win the event without winning a single race!

The battle for third could be spectacular, Belgium usually find a way to get there and Smets’ decision to put Van Doninck on the 450 could be inspired or a disaster! But Holland, Switzerland and GB will all be knocking on the door and you can make a legitimate argument for all three. Good starts and no mistakes will be the key but Holland have an ace up their sleeve with Herlings, Herlings will have a lot of motivation and want to show Gajser, Cairoli, Febvre and Webb what he can do on the big bike. If he rides like he can I think that could be enough to get Holland on the box! And if Bogers and Coldenhoff bring their A game they might even challenge for the win if things go their way!

Individual results are usually more exciting than the team event with more contenders for the win! In MX2 I could see Van Horebeek beating the MX2 regulars, he is flying on the wee bike and pushed Herlings all the way in moto two at Kester, and he loves the hard pack. Paturel is being underestimated and could be a threat if he gets a start as he loves the hard pack and Anstie and Seewer won’t be far away either. Alex Martin should be up there, his bike is fast but can he handle the pressure on a hard pack track?

MX1 is tough to call, Cairoli will be super motivated in front of his home crowd but the hard pack doesn’t usually suit the Italian. Tim Gajser will be flying, as long as Slovenia qualify, he and Febvre put thirty seconds on Cairoli on a similar circuit in France during the GP season and it could be another battle between Gajser and Febvre for the win, but the Frenchman has made a lot of mistakes recently and will have more pressure on his shoulders. Then you have Cooper Webb who had an epic battle with Febvre last year and is in even better form in 2016. Webb should get the starts and he will put all on the line to win. But it’s hard not to go with Gajser on his favourite surface, he will want to show the world his speed and demonstrate why he is the 2016 MXGP world champ.

In MX3 it’s hard to look past Herlings, with the motivation to win for himself and try and lead the team to the podium Herlings will be on it. He already beat Strijbos at Kester and will be confident he can hold of Anderson, Tonus, Paulin and Boryshev, although you never know which Gautier Paulin will show up especially with France going for the win!

MX1: Tim Gajser (if he was racing!) So I’ll switch to Cooper Webb in his absence.
MX2: Jeremy Van Horebeek
OPEN: Jeffrey Herlings

Paul McCready: I originally had USA as my favourites, but I have changed my mind to France. It will definitely be between those two teams to win, but I think people are underestimating Pautrel on a hard pack, technical, French like track that Maggiora is. Alex Martin has raced the nations before, but it wasn’t with the suffocating pressure he will now have as a Team USA rider and he did crash in both motos when under pressure to perform at his home track at Millville earlier in the year.

Paulin and Anderson is another tough one to call as Anderson is only back from injury and Paulin had his most dissapointing season in his career, although he always finds away to step it up the Mxon.

That leaves Febvre and Webb to renew their duel from last year and starts maybe all that splits them. Neither have been pulling too many holeshots this year with Febvre probably suffering the worst but he has been testing a new engine to help with this, will it be enough?

The third spot on the podium is a bit of a lottery between Switzerland, Holland and maybe even GB. I am going with Switzerland to nick it. Tonus is desperate to impress to find a ride in mxgp and rumors suggest a couple of Honda spots are free if he can impress this weekend. Jeremy Seewer is going to be good on a track like this and I think he will fight it out with Anstie for the top mx2 rider honors. Guillod has plenty of speed and if he can find some consistency, a couple of top fives could see Switzerland make the podium.

However, there is always Cairoli, Herlings and Gajser to mix things up. Even though Italy and Slovenia haven’t the strongest teams, these three champions will have pride and in the case of Cairoli his home support (the Solvenians don’t have too far to travel aswell),  to prove they are the best riders on the planet right now.