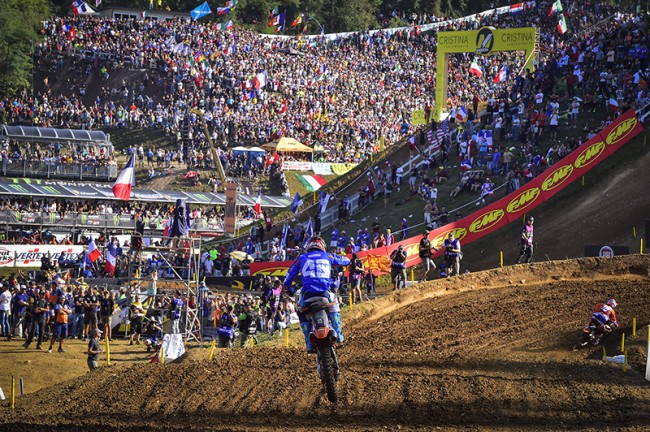 With 30 years of experience tucked tightly under our belt, the success of the 2016 Monster Energy FIM Motocross of Nations presented by Fiat Professional on the nostalgic hills of Maggiora Park was a mesmerizing spectacle of what has been achieved in our beloved sport thus far.

The enormous, passionate and boisterous crowd has rewritten the handbook of fan etiquette with their non-stop flag waving, chain saw revving, air horn blowing, chanting, singing, and cheering that contributed to this years’ motocross of nations being as hair-raising, memorable and emotionally charged as it was.

It has been a while since the Chamberlain Trophy was so tightly contested. In the final race of the day the ‘Nations Result’ board shuffled between The USA, France and The Netherlands, with USA being one man down after a mind boggling scenario sidelined their best performer of the weekend Jason Andersonimmediately after he won Race Two, and also with the defending champions, Team France, being buried at turn one. Meanwhile, The Netherlands had a high-powered start to the race with both of their riders, Jeffrey Herlings and Glenn Coldenhoff, inside the top three.

The Netherlands led the initial stages of the race, but as Coldenhoff faded and Webb propelled forward, The USA took over at the top. Team France had their work cut out for them, but Febvre is never one to shy away from a challenge and eventually caught Webb and put him on the front line for Team USA. Both riders engaged in a titanic battle, which raged on ‘til the moment Webb got cross-rutted and tipped over. With Webb losing a few spots The Netherlands leapt to the top of the board once more, and with one lap to go they were right on the cusp of claiming their first ever MXoN title before Febvre spoiled everything when he passed Tommy Searle for the vital 1 point that was required for Team France to defend the cup.

Team France won the Motocross of Nations for the first time in 2001 in Namur, Belgium with Yves Demaria, Luigy Segy and David Vuillemin, and they didn’t win it again until 2014 in Kegums, Latvia when Gautier Paulin, Dylan Ferrandis and Steven Frossard silenced the haters with their emphatic win. Since 2014, France is yet to be beaten, and their trail blaze continued in sensational style today around this spectacular hillside circuit, in a cauldron-like atmosphere that we have become accustomed to at the MXON.

The Netherlands didn’t only have one Bullet in their gun this weekend; Glenn Coldenhoff was also lethal as he led Italy’s own Antonio Cairoli around turn one. Febvre, who was fifth around the first turn, lost his nerve on lap two and passed Australia’s Todd Waters before pressuring Canada’s Kaven Benoit into a small mistake to take third place.

On the third lap, the Italian erupted as Cairoli ripped up the inside of Coldenhoff to take the lead down the start straight. The following lap, Febvre, who was riding like a man possessed, carried a serious amount of momentum right around the outside of Coldenhoff for second, before putting the exact same move on Cairoli a few laps later.

Belgium’s Kevin Strijbos was silent but violent as he set fast lap after fast lap, and came out of nowhere to pass Coldenhoff for third at the midway mark.  Meanwhile Team USA’s Cooper Webb was also on a diehard mission to claw back spots way after starting outside of the top twenty. The American attacked the track fearlessly, yet with an incredible amount of control as he put an effortless pass on Coldenhoff for fourth with less than five minutes to go.

At the checkers, the fans roared for their hero Antonio Cairoli as he crossed the line in second place behind Romain Febvre, who took his third consecutive MXoN race win if we count the two he took last year in front of his home crowd in France. Belgium’s Kevin Strijbos put in an incredible ride for third ahead of USA’s Cooper Webb, while another Belgian in the form of Jeremy Van Horebeek rounded out the top five and was the best placed MX2 rider.

A good start couldn’t have come at a better time for Team USA. Jason Anderson ripped the holeshot ahead of Switzerland’s Arnaud Tonus, France’s Gautier Paulin and Holland’s Jeffrey Herlings. Herlings doesn’t do anything slowly, and he slung shot past Paulin before the end of lap one and squeezed Tonus on lap two which put him in second place before the end of lap one.

Behind Paulin, Evgeny Bobryshev made Russia’s presence noticeable when he ran hot up the inside of Paulin and almost T-boned him before dropping off the pace. Australia’s Dean Ferris nipped by the Russian who ended up crashing mid-moto in the same dip that caught Cairoli out in the Qualifying Race yesterday.

Meanwhile, Herlings set the fastest lap of the race on lap five and was taking sizeable chunks out of Andersons lead. Herlings showed Anderson a wheel on a couple of occasions before he lost his mind in frustration and slipped into his smaller bike habits where he could hammer the throttle and get away with it. This time he didn’t save it; he got too hard on the gas, lost traction and high-sided. Fortunately he had a good cushion and didn’t lose a spot, although the next three riders did catch him.

With five minutes to go, Herlings, Tonus, Paulin and Ferris put on a breath-taking exhibition of close combat racing as they rode wheel to wheel and ‘bar to ‘bar. Ferris managed to pass Paulin at one point but a gust of wind caught the Frenchman’s sails, and he passed Ferris back before passing Tonus half of a lap later as well.

Meanwhile, the MX2 riders had crept in on the action and with three laps to go ‘the Jeremys’, Belgium’sJeremy Van Horebeek and Switzerland’s Jeremy Seewer, who were split by Great Britain’s Shaun Simpson, had Tonus and Ferris in their sights.

As is the intense racing wasn’t hard enough on the old ticker, hearts were stopped when the race winner, Anderson, was landed on while celebrating. Jason was taken to the hospital for further observation.

In what is the most evenly matched race of the day with all 40 riders on 450cc bikes, it was the 450cc rookieJeffrey Herlings who led the way into turn two, with Great Britain’s Tommy Searle being the filling in a Dutch sandwich as he chased Herlings with Coldenhoff, hot on his heels.

Antonio Cairoli kept the crowd screaming at the top of their lungs when he executed a series of great passes to take second place before the end of lap one.

Belgium’s Kevin Strijbos looked better than ever today. Yes, he did win his home grand prix, the MXGP of Belgium, but that was just a mega result on paper. Today, Strijbos was physically riding superb!

As Coldenhoff faded and dimmed The Netherlands chances at hoisting the Chamberlain Cup in the air for the first time in the history of The Nations, Cairoli caught Herlings for a brief challenge, but all it did was tease the boisterous crowd as Herlings sensed he was there and hooked yet another gear to win relatively easily.

Meanwhile, it was the crucial battle for fourth that took epic to an all-new level as Webb and Febvre charged hard with the weight of their nations on their shoulders. At that point, USA had the lead in the overall standings ahead of The Netherlands and France, but then Webb threw it away when he got cross-rutted and fell.

Webb’s mistake worked in favor of The Netherlands who had one finger on the Chamberlain Cup right up till the very last moment when Febvre pulled something out of nothing and made an absolutely vital pass on Searle on the final lap of the race.

The Netherlands’ Jeffrey Herlings was tenacious in his efforts to stretch out a lead for his second ever MXoN race win. The first one was in Lommel back in 2012, which he won in similar fashion when he took the holeshot and checked out.

Cairoli cruised home for second place ahead of Strijbos, Febvre and Searle.