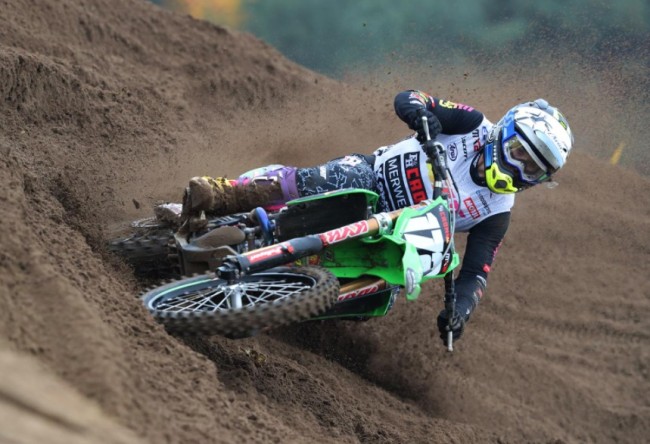 Roan van de Moosdijk of the F&H Kawasaki MX2 Racing Team took a moto podium in the first of three rounds of the FIM World MX2 Motocross Championship in the next eight days at Lommel in Belgium.

The twenty-year old Dutch youngster confirmed his potential once again in the morning as he recorded his thirteenth consecutive top-three Qualifying lap to maintain a 100% record this season. Displaying his experience of racing in the deep treacherous sand he maintaining a consistent pace, fluctuating between fourth and fifth position, for two-thirds of race one but the anticipated charge during the final ten minutes was nullified as he lost his balance avoiding the machine of a fallen backmarker. He would finish the race tenth; slight damage to the bars and levers proved to be a handicap, particularly through the waves. The second moto ran more to plan; starting fifth he quickly found a good rhythm and rode consistent error-free laps to advance to third at the finish to secure sixth overall on the day and maintain his sixth place in the world championship standings.

Roan van de Moosdijk: “The track was already rough and bumpy this morning so I knew it would be tough today. I rode too tight in the early laps of the first moto and got a little arm pump but I could still hold fifth. It was just coming better and I could find a better flow but a lapped rider crashed on a small jump and I didn’t see him until it was too late. I lost my balance when I tried to miss him and fell; the last ten minutes were really difficult as the bars and levers were bent. I knew the second moto was going to be another long race so I concentrated on getting my flow; I knew it was important to ride the waves clean so I concentrated on them and that it is where I passed Olsen. I also passed Renaux so I was pleased with third; it is just a little frustrating what happened in the first moto as it cost me the podium. “

Mathys Boisrame qualified tenth and shot through the first turn alongside his teammate but the repercussions of recent crashes were evident as he surrendered places before pulling out. The French youngster, now tenth in the series points standings, will not race again this year and will return home to recuperate before commencing preparation for the 2021 season.

Mathys Boisrame: ”Since my crash at Faenza where I had a concussion I have struggled a lot and now it’s time to rest as it is becoming dangerous. I still have some difficulties with my vision; I sleep for hours and hours but I haven’t really recovered as we have so many races in rapid succession so we agreed with the team that it was better to take a break.”

BUD Racing Kawasaki had faced a difficult time during the previous day’s European EMX250 Championship round. Pierre Goupillon persevered for tenth in race one but suffered a dislocation of the knee for the second time in a fortnight on the second lap of race two. He has now decided to end his season prematurely and faces an operation on November 2. Venezuelan teammate Lorenzo Locurcio, racing in the unique Lommel sand for the first time, defended his seventh place in the series with twelfth- and fifteenth-placed moto finishes.