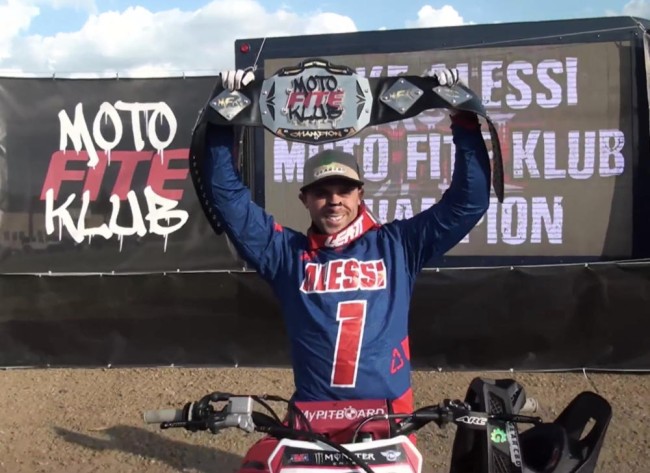 It was fantastic to have some racing back! Yes, it wasn’t AMA supercross or MXGP but to see big name riders of the past still show their speed in a surprisingly aggressive head-to-head format, it provided a welcome reminder of why motocross is so great.

The comradery was there off the track but on it, these guys took it seriously – including the seemingly very laid back Kevin Windham!

Windham for me was the highlight of the event. Seemingly more interested in drinking beers the day before and not in the greatest shape of his motocross life, the natural talent, who said he only rode the bike twice before the event, and hadn’t been on one since Red Bud MXoN before that, was simply brilliant in the early heat races! Even the other riders were in awe of his pure riding ability. 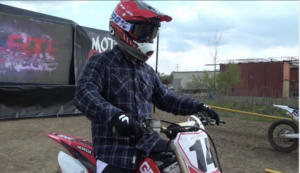 His head-to-head with Pastrana was two brilliant riders not giving an inch but Windham just made it look so easy! Putting the bike exactly where he wanted it, he beat the excitable Pastrana 2-1 and even the race he lost, Windham over jumped the finish jump in desperate last attempt to zap Pastrana at the line! Windham probably should have made the final and looked the fastest out there, but as the races went on he got huge arm pump and lost in the semi-final to Ryan Sipes – even asking the show to go to a commercial break to give his forearms a chance to recover before he could race again! 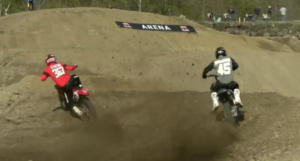 Consequently, Windham went to the LCQ to take on Damon Bradshaw and Ryan Villopoto. RV had got straight up beat by rival Alessi in their head-to-head but did what he had to do in a wildcard race against Pastrana that meant putting Pastrana on the deck to win! 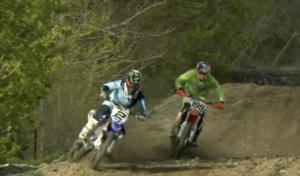 In the LCQ RV started second and passed Bradshaw for the win and a place in the final.Windham didn’t get the start and conceded defeat in the race and to his arms. But Bradshaw was impressive, beating old rival Stanton three times out of three and doing all he could to stay on the back wheel of Pastrana. 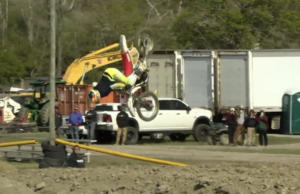 Travis Pastrana was at his entertaining best all night. Riding Broc Glover’s old 490 Yamaha against Broc Glover in his opening bracket race and coming out on top but Glover was going quick for a man approaching 60 years old, the talent doesn’t leave you! Pastrana then went and back-flipped the old machine but it took two attempts to get it right!

After he was put down by Villopoto in the wildcard race, Pastrana cut the track and attempted to gain some revenge on RV only to go down himself instead of RV! Pastrana then promptly got up, hit the freestyle ramp and did a backflip and then a nac-nac over the next jump to signal the end of his night!

The final featured Alessi, Villopoto and Ryan Sipes who said he was so excited to race he woke at 4.30am that morning! 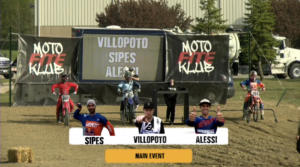 You could feel the tension through the screen as RV nervously sat behind the gate, he was revved up for this and did not want to get beaten by Alessi again! Villopoto this time nailed the start, and it looked like the best rider ever under pressure was going to deliver again but Alessi was having none of it and pushed Villopoto out of the way to take the lead!

That visibly lit a fire under Villopoto and the Yamaha man set about chasing Alessi down as they both gradually pulled away Sipes. This was serious now and, in the three lap sprint, there was no time to waste. RV started to inch his way back to Alessi and an excited Pastrana in commentary he was envisaging a big take-out from Villopoto to win the race. But RV made a slight error and lost the time he gained allowing Alessi the gap he needed to take the win and, aside form the blistering speed of Windham early on in the night, Alessi was the man who brought the speed every race and deserved the win.

Villopoto said that was the hardest he has pushed in a race since he retired but it was that effort and competitiveness of the riders when the gate dropped that made the whole event a success.

Villopoto commented: “I think it was about all in all door to door 40 hours, it was a trek (to get here) that’s for sure! I didn’t have the greatest of starts those first ones and then I pulled a little track out of Mike’s book (in the final) I was able to watch the starters foot a little but, pull a fast one on him! I blew the turn a little bit but man we were racing hard. Those three laps, that’s the hardest I’ve raced since I retired! There was no slouching there from the threeof us. I think Kevin put on some of the best racing we have seen all night! I want to thank all the riders, this took a team effort.”

Alessi: “I want to thank all the people watching in. This was all last minute, the last two weeks. It’s a privilege to race, Ryan, we had our ups and downs in racing through amateurs and pros and obviously he got the best of me, he’s honestly like the mini GOAT motocross and supercross. It was a privilege to race not just him but Ryan Sipes, Kevin windham, Travis Pastrana and watching Bradshaw and Stanton go at it, that was awesome.”