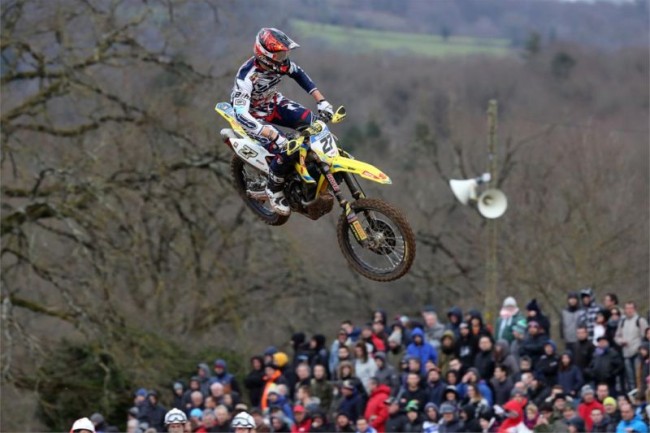 After a successful showing in England last weekend, there was even more improvement from the Suzuki World MXGP team in France at the Lacapelle Masters International where Arminas Jasikonis took a moto win in the hotly-contested MX1 class.

In another good showing, the Lithuanian rider came through the field for a fifth in the first race, however it was his second moto effort that really showed how far he has come this off-season, passing some top-quality riders on his way to victory and third place overall. He also managed to finish second in the MX1-MX2 Superfinal. “It was an awesome day. I didn’t expect to feel so good on a hard pack track, but I managed to adapt to the track quite quickly. If you look to last year, these tracks were my weaknesses, but Sunday I showed that we made big progress on that. It’s still a very long way to improve, to collect experience, but for me this is a big motivation to work even harder. Especially in the second moto I didn’t have a good start, but I managed to pass some guys on quite a tight track and I even took the win. This proved that my training all winter long has paid off!

“But of course, without Stefan and Harry, I would be far away from this result, they are the ones who showed me the right way of working. I’m very happy to get the best advice from the best people. The bike worked super, we managed to set-it-up quite quickly. Thanks to the whole team, they are all working so hard. I hope that this proves a little bit that they don’t work for nothing,” said Jasikonis
.
Team mate Kevin Strijbos continued his good off-season form with two consistent fourth place finishes for fourth overall. The Belgian also came fourth in the combined MX1-MX2 Superfinal and will now head to Qatar feeling confident he can step-up his game for the 2017 MXGP World Championship: “It was quite a good day. It was already a long time ago that we rode on hard pack so at first we really had to adapt a bit to the track. In general, I’m happy with how the day went and my riding went better and better. In the Superfinal I was riding well, especially at the end of the race. I finished three times fourth, so that’s consistent and good. Hawkstone and Lacapelle were two really good preparations for the season. For sure I will still get better during the last two weeks before Qatar, since I haven’t ridden a lot yet. I’m looking forward to Qatar!”

In MX2, Jeremy Seewer underlined his championship winning credentials with a 1-2 performance against a very strong MX2 contingent. The Swiss rider beat a number of his closest rivals and stands in good stead for the Qatar season opener on February 25th. He had this to say about the day’s racing: “In the first moto I didn’t have the best start, but I recovered really well and I was second after a few corners. I was following Pauls Jonass but he crashed, so suddenly I was leading. It was close between me and Paturel but I managed to win, so that was good. In the second moto I got the holeshot and ended up finishing second. In the Superfinal I had another really good start and did a decent race. I finished seventh, which was ok, I’m happy with that.”

Behind him, Hunter Lawrence rode solidly for a pair of fifth place finishes, giving him sixth overall. Up against riders with a lot more experience, the youngster showed that 2017 can be more than just a learning year, and will head to Qatar buoyed by his performances in these two off-season Internationals.

Zachary Pichon was also in action for the team, making his debut after missing out at Hawkstone with illness. Unfortunately, the young French rider was caught-up in an incident in race one with a flag marshal, but came out for the second race and got a well-deserved 14th place. Pichon still has a couple of months to get ready for his first round of the EMX250, which will take place at the MXGP of Trentino on April 15-16th.

Dutch MX2 rider Bas Vaessen also made the trip to France with the team but suffered a crash during practice on Friday and the decision was made not to suit-up for racing, and instead focus on Qatar in two weeks’ time.

Suzuki World MXGP Team Manager Stefan Everts added: “I’m very happy with the results at Lacapelle. It’s a confirmation that we’re going in the right direction with the new RM-Z450WS. It was a totally different track and surface than last week at Hawkstone, but again we managed to get good results. I was very surprised and pleased with AJ’s performance and speed on hard pack, he really adapted quickly. This is also a sign that his hard winter training is really paying off. Kevin was good too. He was especially good in the Superfinal. He’s still building up to his best form, but he showed already some good things. Overall we got fantastic results this weekend and results like this are a big motivation for the whole team.”