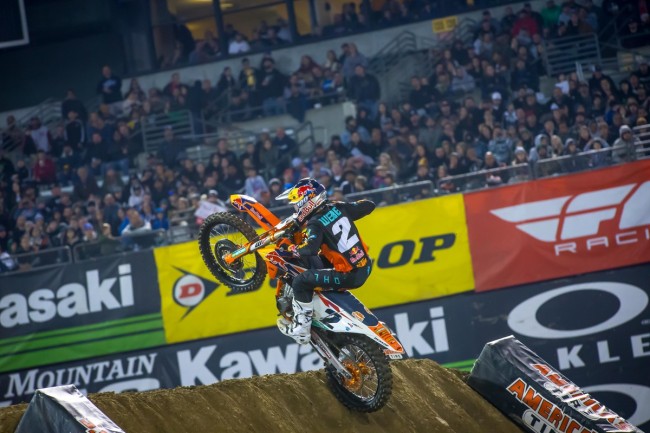 Decrease Font Size Increase Font Size Font size Print Send
The 17-round schedule for the 2020 season of Monster Energy AMA Supercross, an FIM World Championship, will return to some of the sport’s most iconic stadiums while also rotating fan-favorite markets like St. Louis, Mo., Tampa, Fla. and Foxborough, Mass. back into the routing.
The season finale moves to the sports-friendly state of Utah on Saturday, May 2 at Rice-Eccles Stadium in Salt Lake City.

Saturday nights belong to Supercross and the stars of the sport will take to the track beginning on January 4, 2020 at the iconic Angel Stadium of Anaheim which has hosted Supercross more than any other venue in the sport’s 46-year history. The Anaheim Opener sets the stage for the season and typically offers a few surprises by revealing off-season preparation for the most competitive and highest-profile off-road motorcycle racing championship in the world. Last year, Justin Barcia became the 20th different winner in a memorable, rain-soaked finish in front of a capacity crowd.

Returning in 2020 are races in St. Louis, Mo. at the Dome at America’s Center on January 11, Tampa, Fla. at Raymond James Stadium on February 15 and Foxborough, Mass. at Gillette Stadium on April 18.

Additional highlights include heritage markets like Arlington, Texas on February 22 at AT&T Stadium where 57,000 plus fans witnessed the closest race in history last season between Cooper Webb and Ken Roczen, plus Atlanta, Ga. at the Mercedes Benz Stadium on February 29, Detroit, Mich. at Ford Field on March 21 and Seattle, Wash. at CenturyLink Field on March 28.

The series then returns to Denver, Co. at Broncos Stadium at Mile High on April 4 for the second consecutive year where more than 59,000 raucous fans cheered on hometown favorite Eli Tomac in what was one of the loudest races in recent memory.

Las Vegas has hosted the final race for the past 23 seasons and remains on the schedule as the penultimate round in the series which will then head to Salt Lake City for the finale and title crowning.

“Our goal is the continued growth of the sport and rotating markets every couple of years, expanding Supercross Futures events and moving the finale to a new location helps keep the series fresh and exciting for the fans, as well as for the race teams and athletes,” said Todd Jendro, Vice President of Operations – Motorsports, Feld Entertainment. “Utah has become synonymous with elite, world class sporting events and we thought hosting the finale in Salt Lake City would be a fitting choice.”

Supercross embodies the State of Sport lifestyle with a majority of the fanbase spectating or participating in outdoor sports and leisure activities.

“Utah has a long history of hosting Supercross events and other major international sporting events, including the Olympic Winter Games,” said Utah Sports Commission President and CEO Jeff Robbins. “The season finale will be one of the biggest sporting events ever held in Utah, driving tremendous economic impact and media value to our great state. We are excited to welcome back the top riders in the world and their terrific fans to Utah.”

Additional details on special travel packages will be made available later in the year as Utah opens its doors and its treasures to the Supercross community.

“The 2020 schedule gives fans across the country an opportunity to witness one of the greatest shows in motorsports,” said AMA President and CEO Rob Dingman. “The AMA is proud to work with championship series promoter Feld Entertainment, Inc. and the FIM to ensure the sport continues to achieve the highest standards for fairness and competition while thrilling, exciting and inspiring fans of all ages.”

“Monster Energy AMA Supercross, an FIM World Championship is where the best riders in the world battle for the ‘number one’ plate. It is a demanding and intense series of 17 events in just 18 weeks,” said Jorge Viegas, FIM President. “Demanding for the riders and teams, yet exciting for the fans worldwide who cannot wait to see their heroes enter the stadium and challenge the track. Last season we saw the ‘outsider’ Cooper Webb win the Championship in style beating the likes of Tomac, Musquin, Roczen and Anderson. Only time will tell if he can do it again in 2020.”

Lastly, in its second full season, Supercross Futures, an AMA Amateur National Championship, will take place in ten select markets while continuing to establish itself as the world’s premier developmental platform for amateur Supercross racing. The 2020 national championship will take place in October following the Monster Energy Cup. Dates and location will be announced later in the year.
All tickets for the 2020 season will go on sale Tuesday, October 8 with a presale date of Tuesday, October 1. Triple Crown events and 250SX Class East/West Showdown races will be revealed when tickets go on sale.
Before the 2020 season officially begins, the sport’s top athletes will battle it out in Las Vegas on October 19 at the invite-only all-star event – the Monster Energy Cup. Following a second-place 450SX Class finish in 2019, Monster Energy Kawasaki’s Eli Tomac will return to Sam Boyd Stadium and attempt to defend his 2018 Monster Energy Cup title. If successful, Tomac will become the first athlete to ever win the “Monster Million” twice. Catch all the action live on NBCSN or via the NBC Sports app at 7:00 p.m. PT, or visit SupercrossLIVE.com to purchase tickets.
Words: Feld