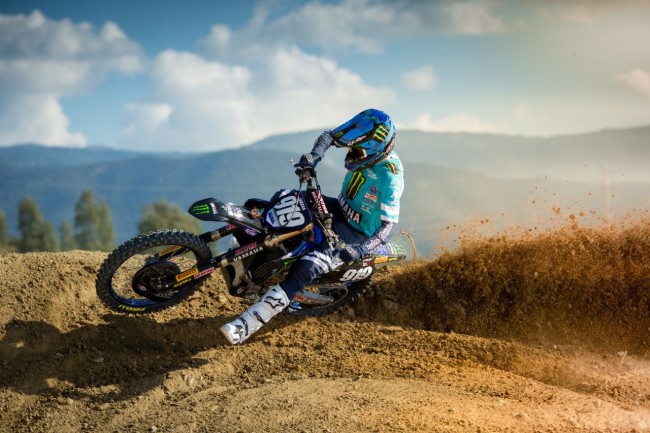 On Sunday, the international season will kick off in Riola Sardo, Sardinia. The Monster Energy Yamaha Factory MX2 Team will line up the same riders as in 2019: Jago Geerts, who conquered the bronze medal in MX2 last year and Ben Watson, who wants to show his potential again after an injury struck 2019. Goal of both riders in 2020: top three and maybe even the world title.

Watson (22), who will be entering his last year in MX2 because of the age limit, is injury free and already had a lot of bike time in Italy. Teammate Jago Geerts (19) preferred to stay in Belgium most of the time for his preparation. Both riders are perfectly on schedule for the FIM World Championships, that will start in five weeks time.

“Both Ben and Jago can look back at a good winter and a decent preparation”, says team manager Marnicq Bervoets. “They are both one year older and also one year stronger. They seem to be ready. But of course, we don’t know how much progression our opponents have made. So, we stay humble. We don’t like big talk.”

Yet, that doesn’t mean that the Monster Energy Yamaha Factory MX2 Team lacks ambition. On the contrary. “We want to do at least as good and preferably even better than last season”, says Bervoets. “That means top three or better. If we don’t manage to achieve that, then we have failed. I believe in our riders. Both Jago and Ben are able to finish inside the top three. I have seen Watson on training a few times and he looked strong, fast and smooth. He just needs to learn to stop putting too much pressure on himself. Something that is less bothering Geerts. Jago is a cool fish. He doesn’t show everything yet on training, but he knows what he wants, what he can do and what he has to do.”

Geerts and Watson are very satisfied with the new YZ250FM. Bervoets: “Yamaha has taken another big step forward. Especially with regard to the engine. I think we have never had such a good combination of riders/bikes in recent years.”

On Sunday, the first international race is scheduled in Riola Sardo, Italy. Afterwards, the Monster Energy Yamaha Factory MX2 Team will head for Hawkstone Park (February 9) and Lacapelle Marival (February 16) to get ready for the first Grand Prix in Matterley Basin, Great-Britain (March 1). “Those three international races are perfect to try out a few things and to improve their physical condition”, says Bervoets. “And also important: we can see the level of the other riders/teams.”

“My preparation went well according to plan. I mainly stayed in Belgium, although I also trained one week in Italy between Christmas and New Year. I have had enough bike time. The new YZ250FM feels really good. More power, better suspension. My physical condition is fine. In Riola Sardo we will see how my speed is at the moment. I certainly won’t be top this weekend. That is not necessary yet. I have to be at top level at the first Grand Prix. I am looking forward to this first race. The winter has lasted long enough. After all the training sessions, it’s time for real action. My ambition in 2020? To finish inside the top three again and hopefully, if everything goes well, to fight for the world title.”

“I missed the end of last season, due to a wrist injury. So, I decided to start a bit earlier, in October, with my preparation for 2020. The wrist injury is now completely healed and I have had a lot bike time. I am now more than three weeks in Sardinia, everything went well. I am satisfied with my level at training and with the new bike, although I have decided not to focus too much on my machine. I may have wanted to change things too often last year. Now I focus mainly on myself. My ambitions? Gosh, I am not the man of stiff statements. I have a goal in mind, but I prefer to keep that to myself. I am looking forward to race again. My last competition dates back to August last year. I’m looking forward to this weekend.”