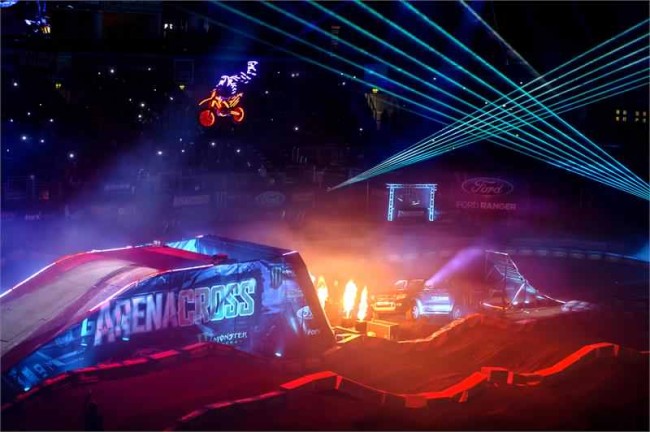 The 2016 Monster Energy Arenacross Tour, powered by Ford Ranger is fast-tracking to the SSE Arena, Belfast this weekend for the only Friday and Saturday evening, double-header of the series.

The first three rounds of the Arenacross Tour have seen a different Pro racer on the podium at each event. Frenchmen Thomas Ramette (SR75 Molson Racing Suzuki) and Fabien Izoird (LPE Kawasaki) won the first and second round, and American ace Josh Hansen (SJR Kawasaki) won the third, yet none of these top contenders lead the championship itself, that honour currently goes to Geartec Yamaha’s Monster Energy athlete Cedric Soubeyras. There is all to play for as the contest gets close to half-distance with just 16 points separating Soubeyras, Izoird, Cyrille Coulon (SR75 Molson Racing Suzuki), Ramette, Hansen and leading Brit Jack Brunell (SJR Kawasaki) – it’s going to be explosive.

Never before has the Arenacross Pro championship been so wide open at this stage of the series, with the best indoor motocross racers from across Europe doing battle with the best from the UK and America, Hansen showed his true mettle last weekend. He didn’t have the best start to the series and much was expected of him but, at Glasgow on Sunday he was on fire, powering to two heat wins and taking the top step of the Main Event podium. He now faces his first trip to Belfast with the rest of the Pro class line-up out to stop him having it all his own way.

The Tour is about far more than flat-out racing though, it’s a Show that has something to thrill the whole family. Hugely popular with the Belfast fans is the Freestyle Motocross element; the riders are a vital part of the Arenacross winning recipe as they whip and flip their way over the AX ramps some 40 foot in the air, each trying to outdo each other. Showboating Spaniard Edgar Torronteras, joins uber-cool Czech Petr Pilat, with Brits Jamie Squib, Dan Whitby, Samson Eaton and Aaron Powley rounding off the crazy high flying team. Three performances each evening will have the crowd on their feet cheering for more.

Arenacross is unique in that it also caters for the younger-racers and the champs of the future. Mini racing gladiators from as young as seven, and riders representing all corners of the UK will be out to lift their individual class crown across the tightly-packed classes. One of which is 15-year-old Husqvarna UK supported Harry Kimber who is currently leading the Supermini group. He’s clearly talented on a motocross bike but is not about to take it easy. “It’s cool to be at top after three rounds and it’s a great feeling to have a good points lead,” said Harry. “But there’s no time to relax as, with nothing in the lap times, I’ve got to keep pushing.”

On the local rider front, Charley Irwin and Matthew Beattie will race KTMs in both the Supermini and 65cc classes and they’re ultra-keen to impress on home soil. “I rode in the event last year,” said eight-year-old Charley and so I will be better prepared this time around.” Matthew finished seventh overall in the 2015 Arenacross 65cc class and will move up a class this weekend. “It will be tough going out on an 85cc bike for the first time, but I’m going to give it my all and make my friends and family proud.”

Doors open from 6.00pm, with shows from 7pm on Friday 15th and Saturday 16th January 2016. Autograph sessions on the Arena concourse will take place around 30-minutes prior to each Show. Fans can pick up a free poster and have a chat with the stars.

Tickets are on sale now via www.arenacrossuk.com.  Individual ticket prices start from £10.00 for children and £19.00 for adults, with a ticket for a family of four from just £49.