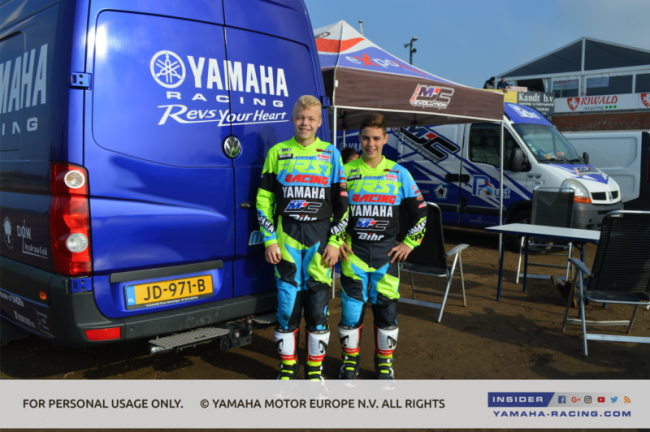 The determination and effort of the MJC Yamaha team will fill an important part of Yamaha Motor Europe’s overall racing structure through high-profile international motocross at European and world level next year. In 2017 the French set-up will represent the initial ‘step’ for promising talent to feed through the ‘blue’ system thanks to their comprehensive structure with YZ125 machinery and GYTR race kits and expertise in assisting potential athletes to continue their evolution and path through the sport.

MJC will field fourteen year olds Rick Elzinga (from the Netherlands and in his second term with the crew) as well as Thibault Benistant (from France) as a new recruit for 2017 with both riders expected to contest respective domestic series as well as the eight-round EMX125 European Championship; the first platform in the rise to MXGP with EMX250 and MX2 next in a rider’s career trajectory. Also on the agenda will be the 2017 FIM Junior World Championship in Estonia on July 30th. Joining the teenagers will be a third competitor; the winner of the 2016 YZ125 Cup and a name soon to be revealed after Yamaha Motor Europe’s ‘Masterclass’ (overseen by former World Champion David Philippaerts) towards the end of November.

“I am very happy with the riders we have for 2017 and we can benefit from the successful work and performance of GYTR material for the YZ125 motorcycles,” commented MJC team principal Loïc Le Foll. “Rick will attack his second season and is very motivated to progress. We are thoroughly behind him and we see good possibilities for the podium next year. Thibault will move up to the next level but he has the mentality and attitude to meet the challenge. The guys are good teammates and work and train hard together and then we’ll welcome the final member of the line-up this month.”

MJC has been prominent on the Junior and European stage for several years and have won or have been closely contesting a French national motocross or supercross title each season since 2013. Former riders include Nicolas Dercourt, David Herbreteau, Zach Pichon and 2015 Junior World Champ Maxime Renaux.

“Confirming these riders and the role that MJC will play in our motocross strategy is another important part of the jigsaw for us and our racing competition in 2017,” commented Yamaha Motor Europe MX Manager Erik Eggens. “MJC are not only giving our chosen riders their first real taste of professional motocross and the kind of support that they can expect as they rise through the sport but they are also taking special care to nurture and ensure the youngsters can push on and achieve all that they can. Along with our YZ125 Cup and Masterclass initiatives this organisation is something we can all be proud of at Yamaha and I hope we can see some exciting results ahead.”

EMX125 is a heavily populated support category to the MXGP FIM Motocross World Championship and the first of eight dates for the two-stroke-shod youngsters will take place at Maggiora Park for the Grand Prix of Italy in mid-April.