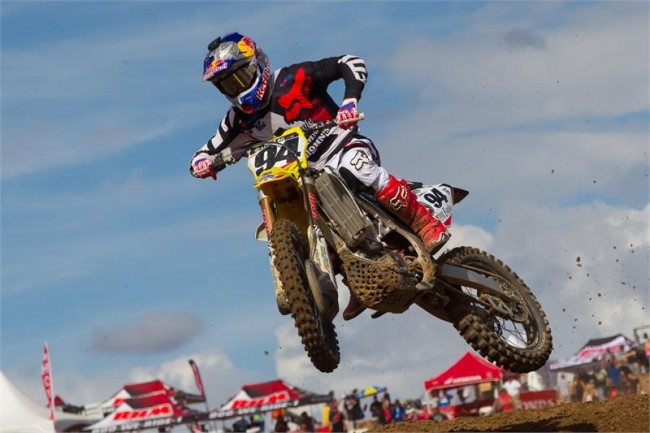 After a supercross season that saw Ryan Dungey explode out of the box and establish himself as the man to beat, Ken Roczen has decided to turn the tables outdoors!

Roczen seemed to be taken by surprise in supercross after initially focussing on consistency but soon discovered that wasn’t going to be enough to beat Dungey to the title.

Once Roczen got himself and his starts sorted he showed Dungey that he could still do the business and win the races, Roczen, although knowing the championship was gone, wanted to show to Dungey and himself that he still had the speed to beat the American when they got away together.

By the end of the season Roczen was the fastest rider in supercross and coming into outdoors Roczen didn’t want to stop the momentum and have a repeat of the start to his supercross season, he wanted to lay down a marker.

Consequently Roczen has totally dominated the first four motos with a blistering intensity in the opening laps to make his mark. And anyone that watched him in MXGP will recognise that his confidence in the bike is back, the little movements he does and speed he can carry is something that Dungey simply can’t match right now.

In fact maybe only Eli Tomac on his day could match Roczen’s current raw speed in the USA, it seems the rest of his main outdoor competition; Gasjer, Febvre, Cairoli and Herlings are all racing MXGP right now – anyone looking forward to the US GPs and MXON to see them all line-up together (finger’s crossed)?!

Dungey though is still there ready to pick up pieces, just as he did when Roczen’s forks failed in the first moto at Glen Helen, his resilience to keep battling away, doing his thing with minimal risk is remarkable. Dungey went from being 12 points down to only two behind and is right in the title hunt despite not being close to Roczen’s speed in the first four motos! Dungey so far has reverted back to type, be fast but consistent and take no risks.

Roczen’ biggest weakness in the US nationals has been dealing with the oppressive humidity at some rounds and that is where Dungey really shines. So while Roczen has delivered the first blow, Dungey will regroup and try to outlast the German, but Roczen will know that many will expect him to fade in the hotter motos and be determined to prove people wrong. So right now it’s a battle of minds, both riders talking themselves into believing they are doing the right thing to win the championship.

Ryan Villopoto said in a recent RacerX interview that you have to beat Dungey to a championship with raw speed, and it seems Roczen has decided to do just that. It will be interesting to see how Dungey responds, he knows (as does Roczen) that RV got into his head with his raw speed, so will Dungey play the long-game and back his fitness and consistency in the heat or will he try and risk more to beat Roczen straight up on speed?

Roczen has set the bar, it will be interesting to see how Dungey responds this weekend in Colorado.