Mike Alessi says he’s going for the WIN at the British GP! 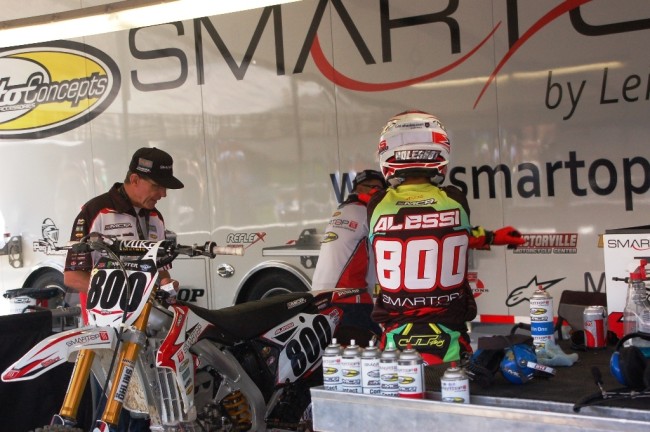 Mike Alessi says he is going for the win at the British GP this weekend!

Mike broke a vertabrae at the Daytona supercross, and scarily didn’t have feeling in his legs for 30 seconds but after 6 weeks he was back on the bike and preparing to compete in two rounds of the toughest motocross championship in the world.  Alessi also said that if things go well at the British and French GP rounds then he may do more MXGP races this season.

It’s that type of commitment that has got Alessi a load of fans, even if his sometimes erratic behaviour ( or his fathers) have lost him some as well!

Speaking to DMXS radio, the ever enthusiastic Alessi said: “We are very excited and looking forward to a fun and adventurous summer. In each race I do I want to be the best prepared I can be to be at the front with the best riders in the world whether it be America, Canada or the European races.  We will get there (England) ten days early and get ready for the Mattlery Basin. I am going to try and win. It would be cool ( to win), time will tell, as long as I am happy with the way I rode and give 100% effort I can’t be mad with the result. (if that’s 1st, 5th or 10th).”

On Villopoto Alessi said: “It looks like maybe his set-up was a little off, compared to what we are used  to in America where the tracks are groomed and they are softer and get ruts. In Europe they don’t touch jack-squat, they leave it rough and choppy and just race whatever it is, that’s what makes those dudes so badass over there because they can race any condition.”

It won’t be easy for Alessi to jump in mid-season but he has been testing for a while and is bringing his whole team and bike with him from the states, he will be very well prepared. With Villopoto, Searle and Strijbos all out injured, the field won’t be quite as deep as it should have been, and with his excellent starts, Alessi could surprise some if he gets away near the front.