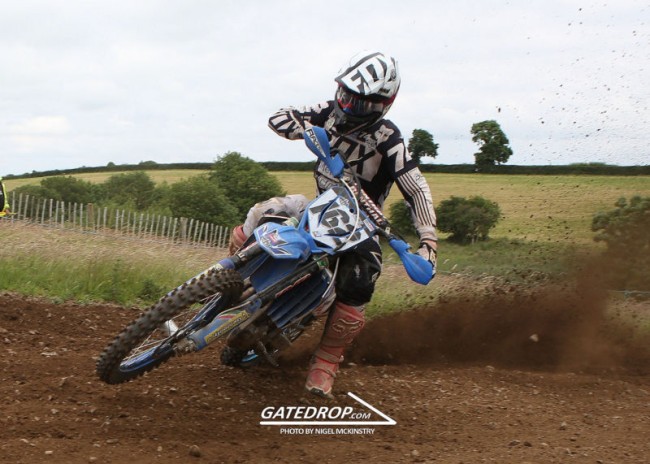 After Stuart Edmonds competed in the MXGP World Championship that took place at Matterley Basin for the Metcon CCR TM team the next race on the calendar was round five of the Irish Championship at Seaforde motocross track.

The day didn’t get off to a great start for Edmonds as he only qualified sixth overall and the fifth MX1 rider as he struggled to put a good, fast lap together during timed practice.

In the first moto, initially it looked like Edmonds got off to a great start but John Meara was able to sneak around the outside of the TM rider.  Edmonds was a comfortable second all moto but he didn’t come all that close to challenging Meara as he drew first blood on the day. Also, Edmonds stalled the bike at around the half way mark in the moto and was never able to recover and give Meara anything to worry about.

In the second moto, Edmonds made some improvements to the bike as he didn’t feel that comfortable in the first moto. He was able to grab the hole shot in the second moto, he did come under some pressure from Meara. The gap was mostly around the three seconds mark as Edmonds did a good job controlling the lead and he broke Meara with a few laps to go to seal victory. Edmonds and Meara set a high pace and no one got close to those two, they were impressive.

It was all coming down to a Meara, Edmonds showdown for the last moto. The winner would take all and grab the overall with the John Donnelly trophy with it.  As we seen in the first two moto’s the start was crucial as the track was quite one lined and hard to pass. When the gate dropped again it was Edmonds with the hole shot with Meara right in his wheel tracks.  However, on the first lap Meara made a slight mistake, Edmonds took advantage and never looked back to grab a convincing victory.  It was almost the perfect day for Edmonds winning two out of the three moto’s and getting his name on the John Donnelly trophy. Hopefully this will give him confidence heading into the next round of the Maxxis British Championship at Duns next weekend.

However, Edmonds good performance wasn’t the only thing the team had to shout about as Dylan Stynes put on a good performance. Stynes ended up winning the semi-expect MX2 class on the day with three good moto’s.

In the first moto, Stynes got caught up in the first corner which wasn’t the best start to the day for the young rider. However, he put some fast laps down and worked his way up to the top fifteen in his group.

Again, in the second moto he suffered from a bad start but worked his way up and passed his main rivals to finish in the line in the top twenty and the first semi-expert MX2 rider across the line.

A much better start in the third moto but there was a pile-up around the second corner which was unavoidable. However, he was able to come through and had a good day on his Metcon CCR TM as he continues to build and improve.

He didn’t make it easy work as he suffered from some bad starts but he knows that is an area he needs to work on looking ahead in the season.

Stuart Edmonds: “My day started pretty slow with a fifth in qualifying and moto one didn’t go to plan as I made to many mistakes and stalled the bike half way into the race so I wasn’t riding very smooth. I made some small changes for moto two and it was much better, I was able to ride a little more like myself and with the track getting rougher I was able to pick some lines and get my head down to win the moto. The third race was perfect from start to finish and I felt I rode much more like myself putting some good laps in during the first half of the race. It was great to win the overall and walk away with my name on the John Donnelly trophy which is one I have never had my name on so that’s a lovely bonus for the day. A big thank you to the Metcon CCR TM team and all our sponsors”

Dylan Stynes: “First overall today at the Irish in Seaforde. Happy with how I rode, just need to get out of the gate to make life a lot easier for myself. My TM250fi was unreal to ride today as always. I’d just like to thank everyone at Metcon CCR TM for all their help, CCM Racing, Fox Head Europe, Macho Martial Arts, ReTink Graphics, Swords Motor Factors, Pro Green MX and Vrooam. Also, well done to Stuart Edmonds on the win today”.

The team would like to take this opportunity to thank the sponsors for their continued support: