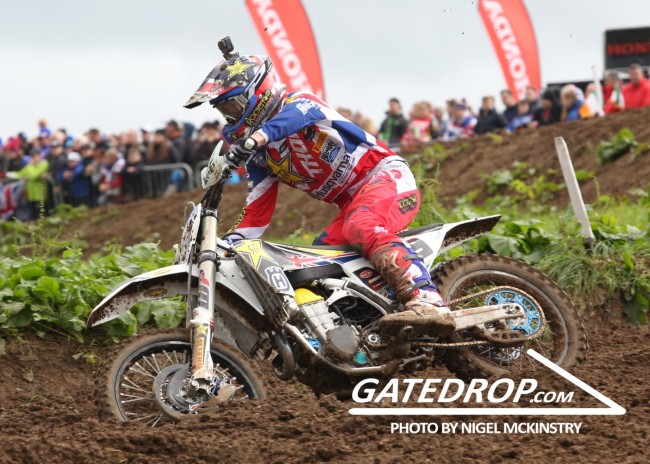 Max Anstie was the biggest story of the 2017 MXoN with a devastating double win in front of a huge home crowd to lead GB to their first glorious podium in 20 years!

In both motos Anstie was awesome. Using his famed technique on the bike to navigate the difficult rutted conditions in the sticky mud, the Englishman kept his cool even when he crashed in race two and still came back strong to take a superb win over Jeffrey Herlings to reverse the result of the final GP moto of the year.

Anstie’s wins weren’t as big as a surprise as some thought, he was very, very strong in the final GPs and came within a lap of winning the final moto of the year. But the style Anstie did it in, under the pressure he had on home turf was what really made it special. On that day on the first of October 2017, Max Anstie was the best rider in the world and he had the whole motocross world watching him.

“It was unbelievable,” exclaimed an ecstatic Anstie in characteristically bubbly fashion straight after the race. “I felt like this last part of the season with my team every week we are pushing and pushing and getting stronger and I always had it in the back of my head with these last few GPs getting on the box, I thought, ‘right I’m going to be good for Matterley now.’

“The first race was something special, the crowd were so loud, I had too much time to think, I was thinking, ‘I better stay up!’ In the second race I crashed but in the turn before I could hear the guys saying, ‘all eyes on Anstie can team GB could get a podium!’ I was like, ‘aw, ok!’ then I slid out and I was like, ‘ aw, no!’

“So after that I forgot about all that and tried to race as fast as I could. The guys rode amazing, I have to give it up to Mark, this week’s been stressful, probably the most stressful week of all of our lives. But we made the best of it, we kept solid and it’s an amazing feeling to be on the podium.”

Anstie will go down in history for his ride at Matterley Basin that day and will add his name to list of memorable individually outstanding performances that arise at a race as unique as the MXoN. Think Pit Bierer in 1997, Stefan Everts in 2006, Cairoli in 2012 and 2013. These riders didn’t win the team event but their rides were the memorable moments of the biggest event of the year.