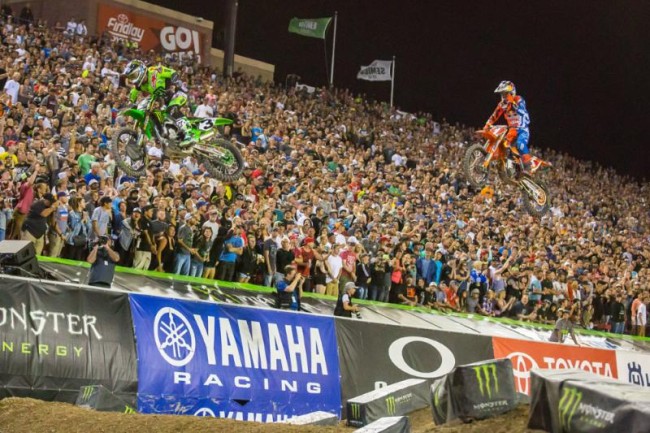 Over the next five weeks we will look at our top five moments of 2017.

Of course it’s an objective selection, but all five are moments that we feel will live long in the memory when 2017 season is re-told and looked back on with fervent nostalgia in the years to come.

In at number five comes the 450 main event in Las Vegas.

It was the race that would decide the 450 supercross title and it would turn out to be Ryan Dungey’s last race of a legendary career.

But the talk wasn’t just about Dungey winning the title in a storybook ending to his career – it was Tomac’s tactics in trying to win that made the race what it was!

The Kawasaki man had ran down a big deficit in the points and actually took the lead of the series until a crash the week before handed the lead back to Dungey in the series. Tomac needed Dungey to finish fifth or worse if he won to take the title and the Kawasaki man nearly pulled it off!

Tomac got the head of the field with couple of block passes on Dungey and instead of doing his usual run-away win, slowed down in a bid to bunch the field up in the hope that would push always cool Dungey into a mistake. The plan was looking distinctly possible to execute with Dungey caught in the middle with apparently no way out of the situation Tomac was controlling.

The tension was high and the supercross title was very much on the line and in play until Jason Anderson bumped Chad Reed off the track and out of the lead group battle!  Suddenly it was going to take a huge get-off or a DNF for Dungey to lose the title, not just a small tip over to drop out of the top four.

The pressure was slightly eased on a mistake-free Dungey until the final couple of turns when Tomac then bumped Dungey off the track in a frustrated final attempt to win the title leaving Jason Anderson to nip up the inside to take his first win of the year. But it was a jubilant Ryan Dungey rolled across the line to take his third supercross title in the final race of a brilliant career.

After the race Tomac said: “In my position I was like, ‘I can try and sprint away or try and bunch the pack up and wait for a mistake and see what can happen’. When the pack tightens up there is nerves from the guys and bumping. That’s all I could do, I definitely wasn’t going to lay over for this thing and give it away. I fought as hard as I could. At the of the day people aren’t going to remember the race wins from me they are going to remember the title from Ryan, he was the better guy this year.”

It was a tension-filled night that ended in joy and ultimately retirement for the successful Ryan Dungey, bitter disappointment for Eli Tomac and unforgettable drama for everyone watching.