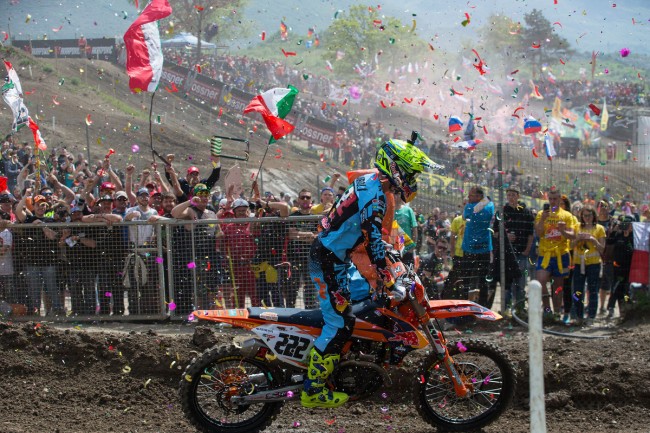 It was the moment that you knew Tony Cairoli was back to his best and ready to take on the world in 2017.

After Tim Gajser’s world title win in 2016 and Herlings moving up to MXGP in 2017, combined with two injury-ravaged years for Cairoli, many pundits thought the Italian maestro was past his best and the young guns would take over.

But Cairoli had other ideas. The Italian was finally fit and for the first time in two years had an injury free winter – and he came out firing!

At his home GP at round five in Italy in Arco di Trento, Cairoli won race one but went down in turn two at the start of the second moto – then proceeded to ride a jaw-dropping race. On a track he doesn’t particularly like and one that is hard to pass, Cairoli simply let it all hang-out to charge right up to second place and finish right behind race winner Tim Gajser, with some brilliant passing manoeuvres.

It was one of the rare times that Cairoli showed his real speed. The clever Italian usually rode with a few percent to spare in years previous, but he knew that might not be good enough at times in 2017, and when he needed to the Italian produced and right there at in the middle of the Italian mountains on a rocky, slick circuit, the world knew just how sensational Cairoli was. Eight world titles wasn’t enough, he wanted nine and he wanted to beat the young guns – and he finally showed the pace he really had when he pushes at 100%!

It was one of the those races that no-one will ever forget. The atmosphere was electric and after the race Cairoli admitted it was one of his best ever rides: “I think this is one of my best races, best GPs ever. I hit the bank on the first corner and almost crashed into the mud but then crashed in the second corner and was hit by a lot of people. I was very p**sed off that I made a mistake and then said ‘I need to put myself on the podium’; I did my best to come back from twentieth place to do that. It was pretty sketchy in some places but I made it happen. When I got to seventh or eighth place I saw the group in front and thought it was possible to catch (Evgeny) Bobryshev for the overall win and kept pushing and pushing and making passes. I had some sketchy moments but that is part of racing: if you want to win you have to take risks. I’m really happy.”