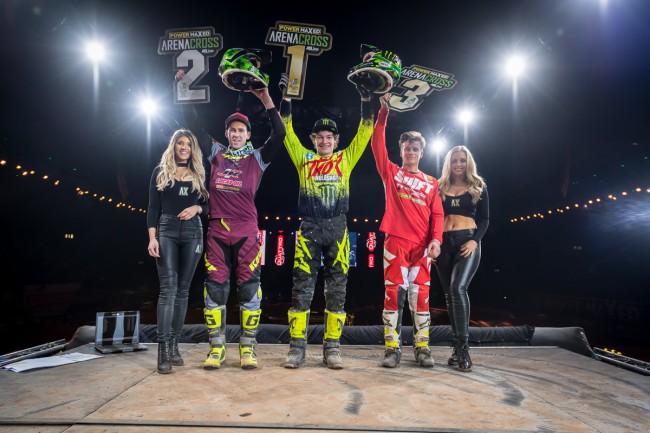 Round three of the UK Arenacross Championship took place on Saturday night at the NEC`s Genting Arena, Birmingham in front of a capacity crowd.

The day`s proceedings went well for the I-FLY JK YAMAHA team with our two pro-racers Julien Lebeau and Dan Reardon setting consistently fast laps and Jason Meara finding his pace on the very last lap of his times qualification to snatch second spot.

Pro-heat-one saw Dan hit the front on turn two and pull away from the star-studded pack. A comfortable win for Dan with Julien a superb 4th place at the flag set the mood for the evening. A repeat performance in heat moto 2 drafted both riders directly into the main event. Dan on pole position and Julien taking to the gate in 6th place.

The first of the Pro-Lite motos was won by series leader Joe Clayton, though our own Pro-Lite star Jason Meara found some more speed in the second half of the race. Both boys went to the line for moto 2 with an eye on the victory and it was Joe who rounded turn-one in the lead only to be stuffed out by a hungry Meara. Meara began to pull away from the trailing pack with Clayton back in 5th place, but at the halfway stage the gap was closing and with Meara making a few mistakes, Clayton made his move and held on to the lead to the flag. Another well deserved 2nd place for Meara and the Pro-Lite I-FLY JK YAMAHA team.

The Pro final was a hectic affair with the SR75 team of Rammette and Coulon heading the field. Dan Reardon gated 6th on lap one but soon began to cut through the field, his chosen passing place was at the end of the long whoop section and by lap-six, Reardon was all over Coulon in second and about to make his move when the Aussie hit the final two whoops and went head over heals down the track leaving the two Suzuki riders to cruise to the flag.

We continue to work on the bikes with the riders and each week, as a team, we improve, this week in Birmingham being our best weekend yet.

This coming weekend, the AX tour takes us all to a double-header in Belfast… In front of Jason`s home crowd, with both Dan and Julien on top form… It is sure to be a thriller…