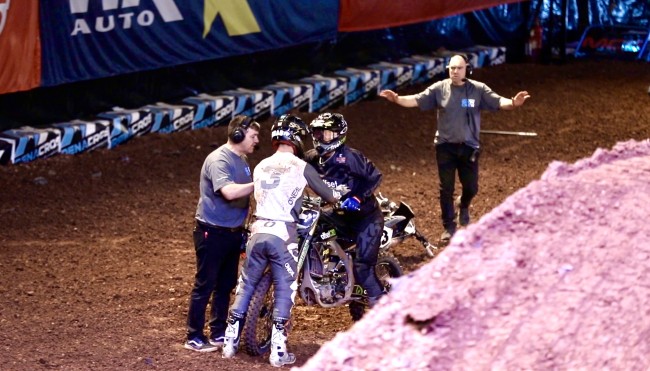 Following a number of on and off-track incidents involving riders Ashley Greedy and Gradie Featherstone at the Birmingham rounds of the 2020 Arenacross Tour on January 31st and February 1st, the series governing body, the MCF together with the series promoters, Arena Sports Live have imposed an immediate competitive ban on both riders taking any further part in MCF sanctioned events and Arenacross.

Both named riders have been informed of the sanctions imposed.

MCF General Manager, Gareth Chamberlain stated that the MCF must stand strong in decisions connected to dangerous riding and violent conduct. “The MCF has today (2nd February 2020) taken the opportunity to make a stand against unacceptable on and off-track conduct. As an organisation we make great efforts to interact and introduce new people into motorsport whilst also ensuring current events throughout the UK that are staged under our licensing body are safe, secure and staged in a consistent manner. The type of behaviour seen this weekend in Birmingham both on and off the track will not develop the culture or environment that we continue to work towards.”

Series Promoter Matt Bates stated that time is called on this type of behaviour: “Arenacross prides itself on being a professionally organised event that attracts more people to off road motorcycle sport than any other race series in the UK, furthermore we attract thousands of young families with youngsters that may one day be tempted to compete in Motocross. For that reason and many more, we will not accept blatantly dangerous riding or violent conduct in the manner we were subjected to in the latest events staged at Birmingham’s Resorts World Arena” explained series promoter Matt Bates.

“It’s easy to get drawn into the drama of what we promote, but to be very clear, all of the riders in our series are fully aware of our rules and opinions of dangerous riding where in most cases over the last few years most riders have shown complete respect for one another in an otherwise closely contested Arena – they also have the ability to race in a clean and tactical way that doesn’t put one another in danger. It’s not the first time this has happened, but it will be the last and on behalf of the dedicated staff, teams, riders, families and fans, we will not let this type of behaviour ever take place without further serious consequence again”.

A further statement will be released by the MCF on 3rd February.