McCanney on a top fifteen result at Rally Dakar 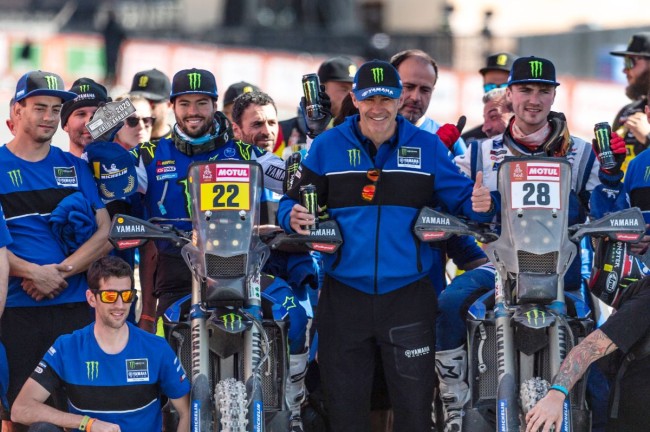 Bringing their participation in the 2020 Dakar Rally to a close, Monster Energy Yamaha Rally Team riders Franco Caimi and Jamie McCanney are celebrating successfully completing the 42nd running of the Dakar Rally. Wrapping up what has been two physically and emotionally demanding weeks of racing in Saudi Arabia, the WR450F Rally mounted duo today completed their near 8,000-kilometre adventures by placing eighth and 18th respectively on stage 12 to claim final overall results of eighth and 15th.

A truly demanding event, the 2020 Dakar Rally presented a totally new challenge to all riders and teams due to taking place in Saudi Arabia for the first time ever. Well prepared and ready to take on the challenge with their four-rider team, the early loss of Adrien Van Beveren and Xavier de Soultrait was a significant blow to all.

Effectively taking over as the Monster Energy Yamaha Rally Team leader following Van Beveren and Xavier de Soultrait’s departure from the event, Franco Caimi’s 2020 Dakar Rally has been one of mixed fortunes. With a hard-fought eighth place overall result the outcome of a truly determined performance, the Argentinian endured some difficult days at the very start of the event before delivering impressive results during the second week. Following two years in which he failed to reach the finish of the event, Franco’s top-10 result gives a much-needed boost of confidence.

As the first rider to stop when his teammate Adrien Van Beveren crashed at high-speed on day three, Franco had to dig deep to reach the mid-race rest day. Despite a second hugely difficult situation following the death of Paulo Goncalves on stage seven, Franco remained steadfast and gradually improved his performances and moved up the overall standings, earning three top-eight stage results.

Entering his first ever Dakar Rally, Jamie McCanney started his Saudi Arabian adventure simply hoping to learn as much as he could and to reach the finish in Qiddiya. Securing two top seven stage results was something the young Manxman never dreamed of.

Taking a super-cautious approach to the first week of the rally, a handful of mistakes did little to dampen Jamie’s enthusiasm, reaching the mid-race rest day in 26th overall in the motorcycle class. Week two saw a notable upturn in Jamie’s confidence and performances. Despite the tragic loss of competitor Paulo Goncalves and the subsequent cancellation of stage eight, Jamie maintained his focus as the event hit the dunes.

Stage nine saw Jamie finish in 20th, but it was during the event’s marathon stages that he excelled. Seventh on stage 10, the former enduro racer then placed sixth on stage 11, highlighting his talents and drive to successfully complete his first Dakar. Ensuring that he finished the 12th and final stage, Jamie placed a cautious 18th to complete his first ever Dakar Rally in an impressive 15th overall and as the second-placed event rookie.

Franco Caimi – Monster Energy Yamaha Rally Team
8th Stage 12 – 8th Overall
It’s a huge relief to finally arrive at the finish of this year’s Dakar Rally. It’s been a really rough two weeks that we have passed through with many different challenges to overcome. Thankfully, we did overcome everything and today we arrived at the finish. The whole team has worked so, so hard, not just during this Dakar but during the whole year. Obviously, I wish Adrien and Xavier all the best for a fast recovery and will now take some time to enjoy this moment and reflect on the event. I’m pleased to have finished, especially after two years of not finishing. It’s been a real adventure and I’m also pleased with some strong stage results. Now it’s time for some rest and then to make plans for the season ahead.

Jamie McCanney – Monster Energy Yamaha Rally Team
18th Stage 12 – 15th Overall
It’s been the longest, hardest 12 days of my life but an amazing experience. Thinking back to day one, my first ever start at a Dakar, how I was feeling, spending so much time riding in thick dust, to now be here at the finish of this incredible event is amazing. It’s all been a little surreal with so much to take in. I started the event lining up for those first stages among the hobby riders and today I started behind former winner Toby Price, it’s been incredible. Being so close to finishing as the highest rookie, I’m kicking myself a little thinking back over the first week. But that’s Dakar and most importantly I arrived safely at the finish and having learned so much. It’s been an amazing experience, and I have to say a huge thanks to all the Monster Energy Yamaha Rally Team for their amazing support. I have a lot more to learn but I’m over the moon to be hear at the finish of my first Dakar.

Alexandre Kowalski – Yamaha Europe Off-Road Racing Manager
Obviously, this Dakar has not gone exactly as we hoped it would, but there are still some real positives that we can take from it. Our rookie – Jamie McCanney – has really delivered a great result. This has been an especially tough Dakar and although he made some mistakes during the first week he has learned, continued to improve and in earning two top-seven stage results has shown something very positive. Franco is our highest placed finisher and had a mixed two weeks, we can say. He had some difficult days at the start of the race, also being the first rider to arrive and assist his teammate Adrien when he crashed heavily. But Franco has come through a difficult event to finish eighth overall, which is very rewarding. We are very proud of both Franco and Jamie’s performances. This has been a very hard Dakar on riders and also on the bikes, so we are very pleased that our WR450F Rally machines have proved their performance and reliability. The way that the entire Monster Energy Yamaha Rally Team dealt with Adrien and Xavier’s departure from the event, immediately giving their full focus and support to Franco and Jamie, was extremely pleasing and showed great team spirit. To have our two top riders out of Dakar so early was hard to accept, but this is how this race can unfold. We all saw just how unfair this race can be with the tragic death of Paulo Goncalves, which put a lot of things into perspective. Adrien and Xavier were both inured, Adrien was very lucky that his injuries weren’t worse, but both will race again. This Dakar has been a real Dakar – challenging, unpredictable and has asked so, so much of the riders and teams. It has been a true adventure for all of the Monster Energy Yamaha Rally Team and I thank them for all of their hard work.