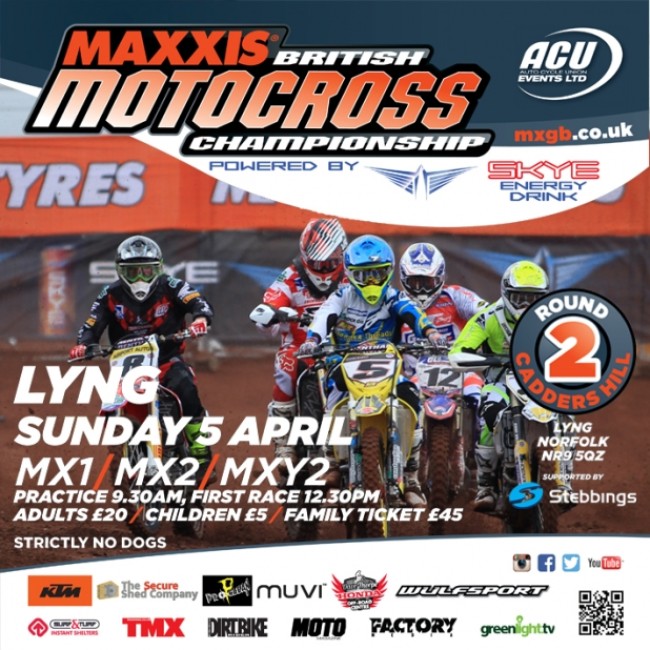 The second round of the Maxxis ACU British Motocross Championship powered by Skye Energy Drinks heads to the fantastic Cadders Hill, Lyng circuit near Norwich on Sunday 5th April.

The Organiser Norwich Viking MCC have once again raised the bar with their preparation at the traditional Cadders Hill venue. During the winter months considerable time and effort has been spent working on changing different areas of the track including a new entrance to the bomb hole section.

Andrew Hay from the Norwich Vikings Club said, “over the recent months we have had heavy machinery working at the circuit and a number of changes to the layout around the bomb hole section have been made. The track is in great condition and is sure to provide for some terrific racing once again.”

For the fourth year running Stebbings Car Superstore of King’s Lynn, East Anglia’s number one car supermarket, have renewed their partnership with the local round of the Maxxis ACU British Motocross Championship powered by Skye Energy Drink.

On track Hitachi Construction Machinery Revo KTM UK’s Shaun Simpson will be looking to continue his winning ways after taking the overall victory at the opening round at Hilton Park where he claimed both race wins in the MX1 class.

Former double British Champion Brad Anderson on the MBO Power ASA Scaffolding Yamaha claimed third overall at Hilton Park and proved that he could well be a title contender once again in the MX1 class.

Local rider Jake Nicholls will make his return to the Championship in front of his home crowd after a pre-season arm injury ruled him out of the opening round. Following three more weeks of recovery the Ipswich based rider will be looking to put the Wilvo Forkrent KTM towards the front of the field.

With the strength of depth in the MX1 class there are a number of high calibre riders who could produce a surprise or two, including Buildbase Honda’s Kristian Whatley and Gert Krestinov, Graeme Irwin on the Heads and All Threads Suzuki and Wilvo Forkrent KTM’s GP rider Steven Frossard who will be keen to regain points in the Championship following crashing out of the opening round.

In the MX2 class the battle for will be between Ben Watson, Steven Lenoir and Adam Sterry following some close racing at the opening round. At Hilton Park it was Ben Watson who dominated by taking claiming victory in both races. Steven Lenoir took second overall on the day and will be looking to close the gap on Watson and avoid the bad luck he suffered at the Lyng venue 12 months previous.

Currently third in the standings is Bryan MacKenzie on the Pendrich Kawasaki, but it will be Adam Sterry who will be out to reclaim points in the Championship after a DNF in the second race cost him valuable points. Sterry arrives at Lyng looking to repeat his race winning form from last year and build upon his fantastic 8th overall finish at his World MX2 GP debut.

Other riders to watch out for in the MX2 class include Liam Knight, Steven Clarke, Jordan Booker, Neville Bradshaw and local rider James Cottrell.

Lyng also marks the start of the Maxxis MXY2 Championship, with a full line up of youngsters all looking to set out their stall for the year. Some of the front runners include last year’s runner Ollie Osmaston, Jay Hague, Kieran Banks and Robert Yates.

This is an event not to be missed and the Lyng circuit is easily reached off the A47 trunk road approximately 5 miles to the West of Norwich. All the action will start at 9:30am with practice and qualifying, followed by the first race at 12:30pm.