Max Nagl talks about his win at Hawkstone! 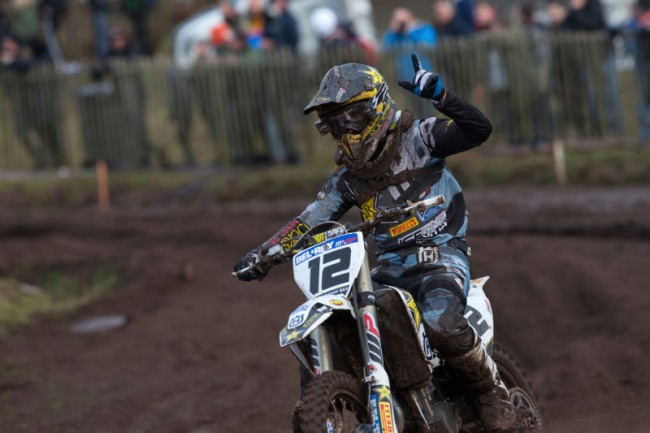 With the event forming part of their preparations for the 2017 FIM Motocross World Championship, Rockstar Energy Husqvarna Factory Racing riders mixed things up with the international elite in England. Crossing the line second in the opening race, Max Nagl improved his pace in the remaining two motos of the day. With his victory in race two helping the German secure the overall win in MX1 class, Nagl went on to wrap up a solid day aboard his FC 450 machine with victory in the combined MX1/MX2 Superfinal.

In what was just his second international event aboard the FC 450, Max Anstie was a strong contender for the top spot in each of the three motos at the sandy British track. Getting the holeshot in the opening race the young Brit put in a strong ride to claim an emphatic victory. Following another holeshot in moto two, Anstie found himself leading the race before a crash forced him to battle hard for fifth at the chequered flag. Pushing hard for the top, Anstie concluded his day with third in the Superfinal.

Rockstar Energy Husqvarna Factory Racing’s Gautier Paulin was also a force to be reckoned with in England. Battling his way forward following a mediocre start in moto one the Frenchman came home in sixth place. Gautier’s best performance for the day came during moto two, with the Frenchman earning the runner-up spot behind his teammate Nagl.

For Thomas Covington the Hawkstone International MX provided a good opportunity for the young American to capitalise on all the hard work he’s done during the off-season. Claiming second and sixth in the two motos respectively Thomas wrapped up the day with third in MX2 category.

Racing in front of his home crowd Conrad Mewse had an event of mixed results. Getting the holeshot in moto one, the young Brit lost precious time after stalling his bike and eventually finished 11th. Improving to fifth in moto two, Conrad wrapped up the day with eighth overall in MX2 class.

The Rockstar Energy Husqvarna Factory Racing team members will be back in action on February 12 at the Lacapelle Marival International MX in France. It will be their last international event before the start of the 2017 FIM Motocross World Championship in Qatar on February 25/26.

Max Nagl: “It was a good day for us. My starts were good in all three motos and I’m happy that I could ride at my own pace. Everything is going according to plan with our pre-season preparations and to get away with the overall win in England is also a good confidence booster. Everybody in the team is giving their best and we will continue working as hard as we do hoping to be 100% for the start of the MXGP series in three weeks’ time in Qatar.”

Max Anstie: “The Hawkstone International is a special race for me and I’m happy I showed I can battle for the top. I got the holeshot in the opening moto and then pretty much rode my own race to the win. I also had a great start in moto two but soon after I had a small crash while leading the race. I gave it my all after my crash and managed to finish fifth. The Superfinal went pretty good, my start wasn’t bad and I pushed hard to finish third. We have one last race next week in France and then it’s full steam ahead for the MXGP season.”

Gautier Paulin: “I feel that today we took a big step towards the right direction. Following last week’s race in Italy we spent two full days testing the bike in sandy tracks and it definitely paid off. In the opening moto I got a bad start and fought my way to sixth. My best race was during moto two. I got a decent start and raced to second at the chequered flag. Overall, it’s been a positive day for me and the team and we will continue working hard to perfect all the minor details before the start of the world championship in Qatar.”

Thomas Kjer-Olsen: “It was a solid weekend for us and we can be happy with it. I felt good on my bike and it was nice to get two top three results for second overall in my class. My starts in both heat races were great and I showed I have the speed to fight for the top. Going head to head with the MX1 riders during the Superfinal was a quite interesting experience. To get away with sixth during the Superfinal is a great result too.”

Thomas Covington: “Overall, it’s been a great day for us. I had a really good first moto and managed to claim the runner up spot behind Jonass. Then in moto two my start wasn’t that great and soon after I started feeling the effects of a sickness I’ve been struggling with since the beginning of last week. During the Superfinal I felt like I was running out of energy so raced cautiously for the finish. Overall, everything is going according to schedule and the work will continue next week in France.”

Conrad Mewse: “It was an OK weekend for us. I got the holeshot in the opening moto but then stalled the bike in a slow-speed section and lost lot of time. The track was rough and one-lined, so there were not that many options for passing. It’s really good we had the chance to test ourselves against the top riders in our class. For me personally I know I can do better, so the goal is to continue working hard until the beginning of the world championship at the end of February.”