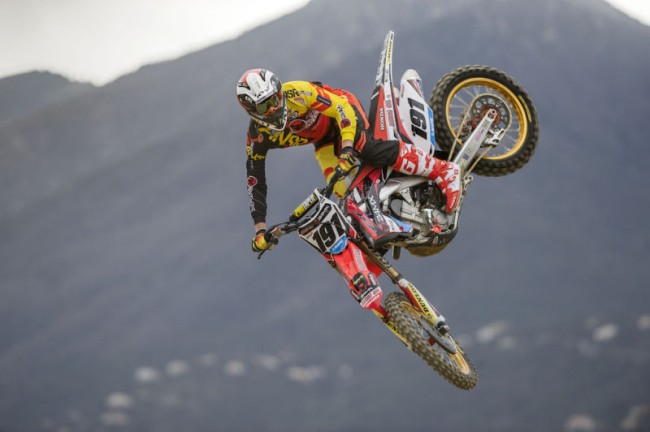 Tuesday, February 23, 2016 — 24MX Lucas Oil Honda rider Matiss Karro, 24, will be unable to race at the opening round of the MXGP season this weekend in Qatar. The former junior world champion picked up a worse than expected injury last Sunday while racing the Lacapelle-Marival international in France.

The expected time off the bike will be between two and three months. Matiss demonstrated good speed in both of his pre-season races. He finished 6th in Valence and recorded two second places in the MX1 class in Lacapelle-Marival.

All possible options to bring in a last-minute replacement rider for Qatar were examined by the 24MX Lucas Oil Honda team. Eventually it was deemed best to regroup and start to focus on the next GP’s. Currently discussions with replacement riders are ongoing until Ken and Matiss are fit to return. 24MX Lucas Oil Honda team wish them both a speedy and complete recovery.

Matiss Karro: “There was still a bit of hope that the injury was not so bad so that I could race at Qatar or maybe one week later in Thailand. Sadly this was not the news that I wanted to hear, especially not because things were going well. I was really looking forward to line up in MXGP again after one year of absence. Now I know that I have to go through rehab. It’s tough but that’s how it is.”

Patriek Heydens, technical director 24MX Lucas Oil Honda: “To lose both our riders, Ken De Dycker and Matiss, in less than one week is a big blow. It’s so exceptional that in all my years in racing I have never experienced something like this. When you’re a new team like ours it’s a major disappointment not to be at the start line after months of hard but positive work. Both our riders were in a great place and on course to a strong season. It’s a pity we won’t be in Losail but we wish all riders, teams, fans and media a great start to the season!”

Marc Boone, 24MX Lucas Oil Honda team principal: “Even with the bad luck we experienced with Ken De Dycker we were confident about leaving for Losail with Matiss. He had been going well and likes the Qatar GP. With two riders sidelined we found ourselves unfortunately in a completely different situation. After extensive discussions with all involved parties we decided the wisest decision was to postpone our MXGP debut. I’d like to thank all of our partners, Youthstream and our fans for their support.”