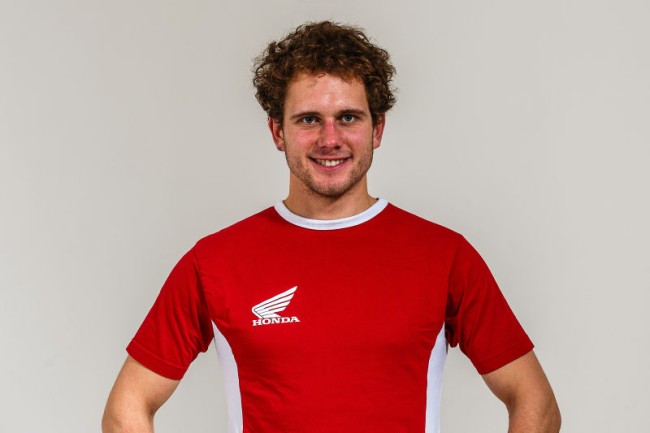 Friday, November 6, 2015 — 24MX Honda Racing is pleased to announce the signing of Latvia’s Matiss Karro.  Karro, 24, will return to MXGP racing after a one-year hiatus.

Karro, nicknamed ‘The Arrow’, made a name for himself with his hard-charging style and impressive starts. In 2008 he established himself as a future star when he became the FIM 125cc Junior motocross world champion. Although he recorded several strong results in MX2, including one British MX2 title, Matiss feels even more at home on the bigger bike. In 2014 he scored his best GP result so far finishing 13th in the MXGP World championship.

While he’s recognised as one of the leading men in motocross in the Baltics, Karro is at least as popular in the UK where he spent most of his professional career. The combination of a spectacular ‘Go big, or go home’ approach on the track and his fun-loving personality off the bike make Matiss definitely one to follow!

As a youngster Karro preferred racing red bikes and having spend the 2015 season on the potent CRF450R he’s already very familiar with Honda machinery.

Matiss Karro: “I have to say I really missed racing at the highest level this season so it’s great to be returning to MXGP! My feeling with the CRF450R is great and I really look forward to start working with the 24MX Honda Racing team. I know I will be working with very experienced people. The last two seasons taught me lot, so now my challenge is to build on that and show what I can do against the best riders in the world. I can’t wait to get going!”

Marc Boone, team principal 24MX Honda: “When you talk to Matiss it’s difficult not to get enthusiastic. That’s exactly the same way he races as well. He’s all-in! Matiss is talented, works hard and gives it his best every time he’s out on track. That’s something that demands respect. He’s also great with fans and media. From our side we’ll give him everything he needs to support him in reaching his goals.”

Davy Dousselaere, Honda Motor Europe off-road manager: “I’m very happy to welcome Matiss Karro into the Honda family again. Matiss is a rider who’s been on our radar for a while now because he has a lot to offer. As he’s proven before he has got the skills and the speed to fight for top ten spots. When it comes to work ethic and fitness Matiss is a textbook example. Matched with the professionalism of the team and the performance of the Honda CRF450R ‘The Arrow’ will be someone to watch!”