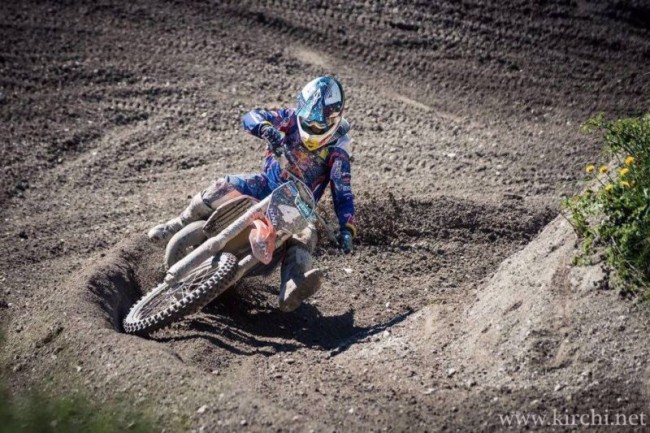 Talented rider from Austria, Marcel Stauffer suffered a crash in the first round of the EMX125 championship that took place Latvia. He came into Italy riding in pain but he battled through it in the first moto for a respectable fourteenth place. However, in the second moto he was in too much pain and couldn’t finish the race.

It turns out that he broke his arm in Latvia! He showed tremendous fight to battle through the first moto in pain and still put in a good result, this kid is tough. When he is 100% fit he could put in some impressive results.

However, he is out of action for Spain but hopes to be back in France. Hopefully the rookie can make it back in France and pain free.

Marcel posted the following message on his Facebook page: After my crash last weekend, I didn’t know whether I could ride at the European championship in Italy. But I did. In the first race I had a good start, but my arm hurts to much so I couldn’t ride 100%. I fight till the end and finished at 14th. In the second race the pain was too big and I wasn’t able to finish this race. Now I know why! I ride this two races with an broken arm. I can’t ride at the European championship in Spain, but I want be back at the EMX in France in 3 weeks!