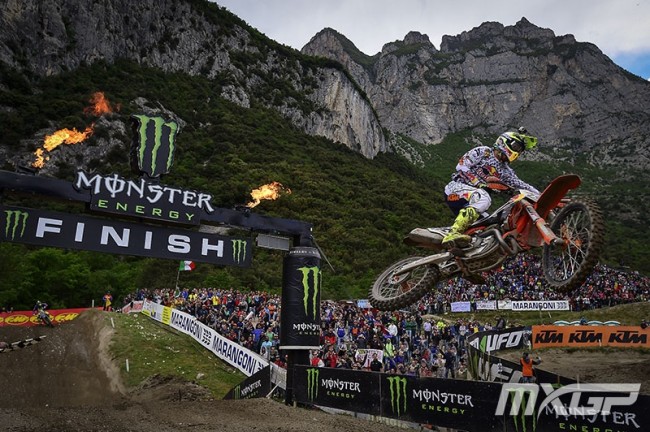 Eleven rounds in and the championship is starting to take shape as we head for the FULLBACK MXGP of Lombardia-Italy which will take place on the black sand ofMantova in Italy this weekend. It will be the twelfth round of the 2016 FIM Motocross World Championshipwhere both Red Plate holders, Honda Gariboldi’s Tim Gajser and Red Bull KTM Factory Racing’s Jeffrey Herlings have been nothing short of incredible. Gajser especially, since he is only 19 years old, that’s two years younger than Jeffrey Herlings, and it already seems easy to forget he is still a rookie in the premier class!

Up until last weekend, the racing between Gajser and the defending MXGP World Champion, Monster Energy Yamaha Factory Racing’s Romain Febvre, was mind blowing. Their determination to win races encouraged both of them to ride so close to the edge it made you squint in awe as you watched them and the insane speed they ride at. Even some of the most famed and successful riders in the world such as Antonio Cairoli and Max Nagl, just to name a couple, were left scratching their heads. Team HRC’s Evgeny Bobryshev even said, “I don’t know how they are going so fast, I have to check because I couldn’t catch them.”

Unfortunately, Febvre’s championship chase took a massive blow last weekend with a concussion in the qualifying race forcing him out of the main events. As a result, he lost 50 points to Gajser, who blew everyone out of the water once again with a double moto win. Yamaha put out a statement last weekend saying that Febvre will not race in Great Britain and Italy, which is a massive shame since Mantova was a track that saw Febvre take a double victory last season. With that said, Antonio Cairoli will probably jump to second place in the standings this weekend, since he is now only 3 points shy of the champ.

As for the track, it made its first appearance on the world-stage back in 1991 where American Trampas Parker won. It since has hosted eight rounds of the FIM Motocross World Championship. Antonio Cairoli has won three grand prix’ here, two in MX2, and one in MXGP, in years 07, 08 and 2010. Last years MXGP winner was Romain Febvre, while in MX2 it was Max Anstie.

The FIM Women’s Motocross World Championship will return to Mantova for the first time since 2008 with the fifth round of the 2016 series taking place this weekend too.

Due to the defending champion Monster Energy Yamaha Factory Racing’s Romain Febvre crashing out of the FULLBACK MXGP of Great Britain last weekend, Honda Gariboldi’s Tim Gajser has stretched out a 74-point lead. Febvre still sits second, but that won’t be for long as Red Bull KTM Factory Racing’s Antonio Cairoli is now only 3 points behind. As for Gajser, the numbers and statistics don’t lie. He has now won 6 qualifying races, lead 173 laps, won 11 main events, has a better than 50% win rate for grand prix overalls, 6, and has stood on the box at every single round. It is obvious Gajser is the guy to beat.

Finding speed and intensity is not that easy when you are already one of the fastest riders in the world.Rockstar Energy Husqvarna’s Max Nagl knows better than anyone as he finds himself eager to match the pace of Gajser. The German is currently fourth in the championship, 27 points down on Antonio Cairoli in third and 30 points shy of Febvre in second.

Team HRC’s duo of Gautier Paulin and Evgeny Bobryshev are always podium threats and one, if not both, are always lurking around the front of the field. Since Paulin has returned from injury, he seems to be feeling fresh. The Frenchman knows he has more in the tank, so he is satisfied with what he is achieving despite not being 100%. This weekend GP21 will also be on the LIVE Studio Show with Paul Malin and Jeff Emig, so tune into www.mxgp-tv.com at 11:30 (CET) to watch it LIVE and for FREE.

As for Red Bull KTM Factory Racing’s Italian stallion Antonio Cairoli, everything seems a bit fuzzy. The eight-time world champ is far from done, yet he is definitely no longer the guarantee he used to be. TC222was solid in race one last weekend at Matterley Basin where he finished second place, but his tenth in race two left us puzzled. The former champ later announced on Facebook that he cased the quad and hurt his left wrist. If the damage is not too bad, it should be a good weekend for the home soil hero here.

You should also keep an eye on Monster Energy Yamaha Factory Racing’s dynamic duo of Jeremy Van Horebeek and Australian wild-card Chad Reed. Van Horebeek, because he is a Belgian and knows how to ride sand, which was evident here last year when he did enough to stand on the second step of the podium, whereas Reed should have blown off some cobwebs and made some changes to the bike. Hopefully he’s more comfortable and can crack the top ten.

In motocross, when it comes to talking championships and titles, some stories are extremely obvious, while others are slightly subtler. Jeffrey Herlings’ is kind of those obvious ones since he has a commanding lead of 148 points over Jeremy Seewer and has pretty much dominated the championship with 21 from 22 race wins. Although in saying that, we can’t get too carried away because if there is something The Bullet has taught us over the last couple of years, it is that ‘it ain’t over till it’s over’.

Jeffrey has never won a grand prix here in Mantova, but since it is sand, it’s likely he will get the job done. But, there are a couple of riders that could make an impact, and they are Monster Energy Kawasaki Racing Team’s Dylan Ferrandis and Team Suzuki World MX2’s Jeremy Seewer. “We are always second to Jeffrey and we want to beat him,” Ferrandis said last weekend, “I try my best everytime.”

While Ferrandis has managed to beat Jeffrey once this year, and is the only rider to have done so, Seewer was the fastest rider in MX2 last weekend and hit a career milestone with his first point in the Tag Heuer Fastest Lap competition. That achievement alone could be a sign of things to come, and by ‘things’ we mean race wins.

Red Bull KTM Factory Racing’s Pauls Jonass will be stoked to racing on the soft stuff this weekend and will be looking to take home his sixth piece of silverware.

The points are tight in the battle for fourth between Wilvo Standing Construct Yamaha’s Aleksandr Tonkovand Kemea Yamaha Official MX Team’s Benoit Paturel with only 5 points separating the two. Both blue boys are similar in speed and have both been on the podium twice so it should make for good racing.

It would be mega to see last year’s MX2 grand prix of Lombardia-Italy winner, Rockstar Energy Husqvarna Factory Racing’s Max Anstie, be able to get the job done with Herlings’ on the line. As for the Italian MX2 star TM Racing Factory Team’s Samuele Bernardini, he’s not the biggest fan of the sand, yet he must know that it is something he needs to work on. Bernardini only finished nineteenth here last year, so he is sure to want to better that, and given how much he has improved since last year, it’s a pretty safe bet that he will.