Mantova MXGP next for Suzuki! 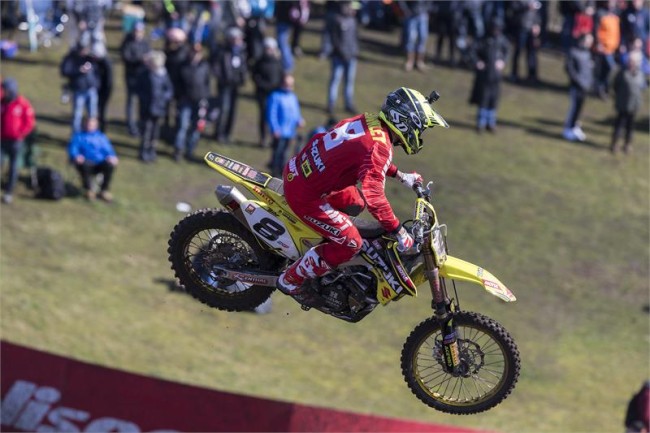 Little chance for respite this week for Team Suzuki with the Fullback Grand Prix of Lombardia at the Tazio Nuvolari circuit taking the series to Mantova for round 12 of 18 in the 2016 FIM Motocross World Championship.

The shallow sand represents the second visit to Italy for the teams and riders this season. Team Suzuki World MXGP will provide Ben Townley with his second outing in a week on the RM-Z450 and with the New Zealander able to get some valuable track mileage in his comeback from a left wrist injury “it will be good to get another race in for sure,” he said after the event in Matterley Basin in the UK last Sunday.

‘BT’ might be slightly frustrated by the amount of laps in anger he has made this campaign but the veteran is more than acquainted with the factory RM-Z by this stage and was encouraged by the steps made with the team midway through the British Grand Prix last weekend in terms of handling. “My favourite aspect of the RM-Z450 is the chassis,” he imparted in a quiet moment away from practice and qualification. “I feel very confident with it and it gives you a safe feeling all the time. The bike never does anything unexpected whether you are in the mud or the dry; it is very consistent across all types of terrain.

“We made another change to the shock and definitely in a better direction for me with better drive out of the corners and up the hills,” he spoke of recent progress with the Lommel-based crew. Townley will be the sole representative once more in MXGP with Kevin Strijbos needing extra time to recover from his own left wrist problem and the Belgian will be able to profit for another three weeks with MXGP about to enter a summer break.

In terms of silverware Team Suzuki World MX2 will have Jeremy Seewer pushing hard on his RM-Z250 and with the Swiss more than familiar with the compact, park-set and largely flat Nuvolari course. The ‘#91’ will be trying for his eighth podium appearance and to further consolidate second place in the MX2 championship standings in what is turning out to be a duel with Pauls Jonass.

“I’ll be doing some sand riding but not too much because these races take a lot of energy,” Seewer said on his plans this week. “I’ll get one full day and confirm some good suspension settings for the sand. I like Mantova and have been riding there a lot as a kid and practicing. It is not that far from my place in Switzerland so I think it will be a good track and we’ll see some nice racing.”

Mantova was also the site of Brian Hsu’s world championship debut last year and where the young German shone on the RM-Z250 to score a top-10 finish at the first attempt. Hsu grabbed points and valuable time on the bike at Matterley Basin for his initial appearance this season after recovering from a broken wrist. “It’s not my favourite track but somehow I seem to go well there,” he said. “It’s technical whereas at Matterley it was wide-open and hard on my arms.”

Resting in third place in the EMX250 European Championship, Bas Vaessen is in action once more with Grand Prix’s feeder series entering the eighth round of 10 this year. The Dutchman is eight points ahead of Jorge Prado and 69 behind Darian Sanayei meaning that the ‘#98’ has a decent chance of winning a top-three finish this term. Vaessen will use his considerable sand skills in Italy and has to be considered a viable threat for a third rostrum celebration.

The weather forecast for the weekend predicts stormy and hot conditions with maximum temperatures touching the mid-thirties.