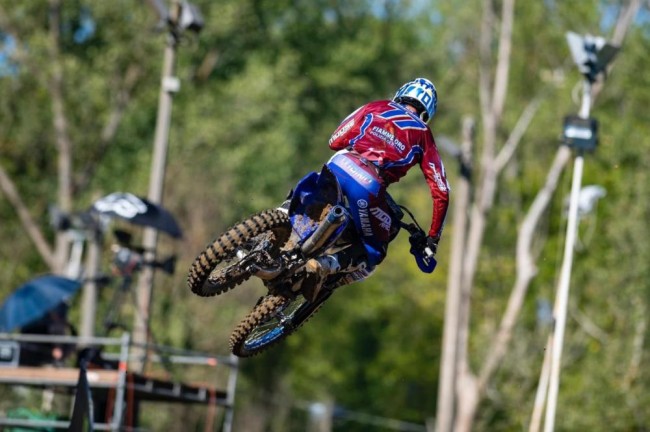 After the triple header in Latvia last month it was time for the MXGP World Championship to resume at another triple header in Italy at the slick and hard pack track of Faenza. The old school track presented another challenge for the riders and completely different from Kegums which hosted the last rounds of the series. The Gebben Van Venrooy Yamaha Racing team were hoping to make even more progress after a positive Latvia.

In the opening race, things didn’t get off to a good start as all three riders got bad starts with Lupino coming out the worst. Another riders foot peg got stuck in his wheel but meant he lost a lot of time but thankfully the bike wasn’t damaged, and he could go to work on coming through the pack. The hard pack track suited the Italian and on the final lap he passed Jacobi to earn one championship point to finish twentieth.

As for Vlaanderen, he also suffered from a bad start, but he was riding with a good flow and made his way through a deep and stacked field in MXGP. He ended up a solid fourteenth which was a good ride under the circumstances.

It was a difficult race for Covington who hasn’t raced conditions like this for a couple of years after heading back to the AMA scene, but he battled hard to thirty-third. Racing these kinds of conditions will help him improve.

Race two was more positive for Lupino, he didn’t get a good start as he was down in nineteenth after the opening lap but he battled hard and passed some good riders ahead of him. In the end he came home in an impressive tenth – a great effort and even beat Gautier Paulin who’s on the full factory Yamaha. That’s the kind of results we’ve been used to seeing from Lupino in the past and he’ll hoping this is the start of things to come.

Despite a good opening race, Vlaanderen couldn’t ride with the same intensity in the second moto as he had some cramps but he battled hard to earn a point in twentieth – every point is vital in such a tough class.

Again, it was another tough one for Covington coming home in twenty-fifth, but he now knows what to expect from the next two rounds of the series at the same track.

All three riders will be back in action on Wednesday at the same track for round seven of the MXGP World Championship.

Alessandro Lupino (14th overall): I am pretty happy about the race, finally. I needed that kind of speed. The last week I felt was going better physically and mentally so I was ready to fight with the guys and that’s what I did. I pushed for the beginning to the end to the last lap. I’m a little disappointed about the first moto as I crashed and a foot peg of another rider got stuck in my wheel. I lost a lot of time but anyway there are two more GP’s to go here and I think I can do a little bit better. I’ll recover then think about the next two GP’s.

Calvin Vlaanderen (17th overall): Today was alright but not great. It started off quite rough, I didn’t find a good feeling in the practice and having such a short time to get used to the track and make a good setup with the bike it was tough to get a good lap. I made some changes for the first race and it helped out. I had a bad start and came back quite comfortably to fourteenth, I was happy about my riding but the result was not great, but it was okay. The second race, another bad start and I didn’t really recover so well between the races and I struggled with some cramps in my body so I couldn’t ride the way I would have liked. Anyway, we take the experience and will try to recover well for Wednesday’s race.

Thomas Covington (27th overall): Another difficult GP for me but I’m feeling better and more comfortable on the bike now just need better starts for the next races. Definitely not the results I want but only thing to do now is keep working and I know we can get there. Thanks to the team for all their hard work today.