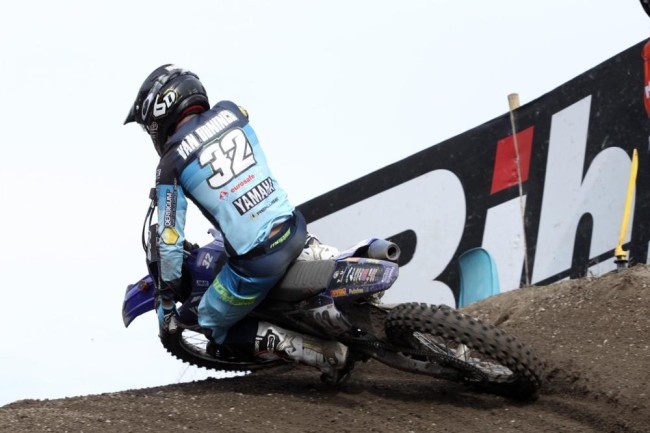 Heading into the final MXGP triple head of the year at the hard pack Arco di Trento track in Italy, the Gebben Van Venrooy Racing team had to deal with the injury blow of Calvin Vlaanderen after a practice crash resulted in a hip injury. The team quickly made the decision to draft in a replacement rider for the final three rounds of the series in what was a good chance for Brent van Doninck.

After picking up an ankle injury during the Mantova triple header which ruled him out of six Grand Prix races, the team were pleased to welcome back Alessandro Lupino under the awning for the last three Grand Prix’s of the year in his home country.

During timed qualifying, Alessandro Lupino set the eleventh quest lap time with Brent van Doninck fifteenth fastest to give the pair decent gate selections for the moto’s. With van Doninck getting drafted into the team just before the GP, it was actually the first time he rode the bike so will have been happy to been just 2.6 seconds off the pace – the times were close.

When the gate dropped for the first moto, it was Lupino who got a brilliant start in fifth and despite it being his first race in months, looked comfortable running the high pace. The Italian stayed in fifth for fourteen impressive laps before Factory riders, Gautier Paulin and Clement Desalle found their way past but seventh was still a superb race to make his MXGP return.

Things didn’t go as well for van Doninck who got involved in a second corner crash and it’s always hard to fight through the MXGP field. The Belgian was determined to repay the team for their trust and worked his way up to sixteenth from last, so the pace was good.

In the second moto, both riders came through the first lap unscathed and both in the top ten! Lupino again was a strong fifth on the opening lap as he was clearly feeling comfortable on the hard pack track. Gajser and Febvre made passes but again it was another brilliant seventh in moto two which is a great effort! 7-7 meant the Italian ended up sixth overall on the day.

Brent van Doninck showed his potential in race two as he started in tenth and that’s where he finished! For the Belgian to post a top ten moto result whilst still learning the Yamaha is impressive and shows he has a lot of potential. Thirteenth overall on his Gebben Van Venrooy Racing Yamaha debut is a solid start.

The team will now prepare for the penultimate round of the series at the same Arco di Trento track on Wednesday.

Alessandro Lupino (6th overall): I am really happy with my comeback. I knew that it was going to be tough because my physical condition is not the best. I’ve only rode four times from Mantova, only four times in one month. In the end I didn’t have the energy to push more so I had to slow down a little. It was great results for myself and the team, so I am happy. I have to thank the sponsors of the team as well as all the people around me. It was a nice GP and I will try to do the same on Wednesday.

Brent van Doninck (13th overall): Overall it was a really good day, it was the first day on the bike also so everything was new to me. In practice I did a lot of laps just to get used to the bike and managed to put in fifteenth. In the first race I got a really bad start, the bike was really aggressive so I thought it would be good to change the sprocket but it didn’t work out on the start, it was really bad. I crashed second corner and was dead last. In lap three I crashed again with two other riders, so I lost a lot of time. I got back up and got back up to sixteenth and was riding really well, at the end I made some mistakes and lost my rhythm a little bit. We changed some things again on the bike for race two, I had a pretty good jump out of the gate, around twelfth on the first lap. I made a few passes to get to tenth and I was there the whole moto battling with Monticelli, Bogers and Van Horebeek was right behind me. I was right in the mix but I just couldn’t pass Bogers but I did well and finished top ten already on the Yamaha. I think it’s pretty good and we are all really happy – we didn’t expect to do it at the first race so I am really happy with my first GP, let’s build from here! I want to thank the whole team for this opportunity – Emile Gebben and Ruud van Venrooy for giving me this chance to show what I can do here in Italy.