Lupino continues to impress in Faenza – top ten in MXGP! 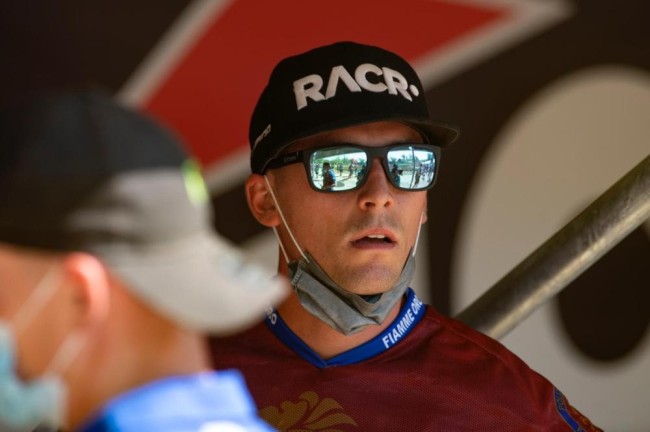 Attentions turned to the second race from three at the Faenza circuit in Italy which presented a slick and hard pack track for the riders to navigate, it was a challenging track.

After a strong GP on Saturday for Alessandro Lupino, he went into the midweek GP feeling confident and performance even better on his Gebben Van Venrooy Racing. After setting the ninth quickest time in qualifying it give him a good gate pick for the races and something he put to good use. At a track that’s hard to pass on it can be good to a good result.

In the first moto, Lupino was in a strong eighth position on the opening lap, for the first time all season he could finally see the speed at the front. The Italian was flying and even moved up to sixth and was catching MXGP champion Gajser at one stage to show the speed he was running. In the end Lupino came home in seventh, a very strong moto to show what he is capable off.

Calvin Vlaanderen also had a pretty good start but was struggling with arm pump which is far from ideal around the Faenza circuit, but he started to find a rhythm towards the end of the race, he eventually came home a solid twelfth. It was a bit of a blow for Thomas Covington not to score points as he just missed out finishing in twenty-first, but he had the speed to get into the top twenty.

When the gate dropped for moto two, Lupino didn’t get quite as good as start as he was outside the top fifteen but at a track, he clearly felt good he made his way forward. The Italian ended up a solid twelfth to secure tenth overall which is a great result in a stacked MXGP field.

During the first lap Vlaanderen was in a good position but unfortunately towards the end of the lap two riders crashed in front of him which left him nowhere to go and he lost a lot of ground. Vlaanderen kept plugging away and ended up twenty-second outside the points but it was good to get the bike time and not just pull in despite being so far behind the pack. It was a good race for Thomas Covington as he came from twenty-fourth and charged to seventeenth just behind former MX2 World Champion Jordi Tixier so he’s made progress at a difficult track and can be happy with the way things are going.

Lupino (10th overall): I am really happy with my GP, both moto’s were really good. We have to start from here now. In the first moto I was really fast and didn’t expect to be so fast. The second moto my start wasn’t so good, I was at the back so it was hard to come back. I was scared of making mistakes, so I slowed down a little bit but finally I made a nice GP. I can only be happy about it. A big thanks to the team and the people around me that makes this possible.

Vlaanderen (16th overall): Another GP in the books. I am glad to be coming out healthy and I definitely made some small improvements the last few days. I can say that I had a good qualifying time, I was tenth which is an improvement from Sunday. In the first race I finally took a reasonable start in around the top ten but I tightened up quite a lot and got really bad arm pump the first 5-10 minutes. I tried to just ride it out, breath and control it. It got quite a bit better towards the end, I managed to finish twelfth which I wasn’t happy about but it’s alright. In the second race I had another reasonable start just outside the top ten. Going down one of the downhills, two riders crashed in front of me and I was in the same rut so I got completely stuck so I’m disappointed about that. I still raced to the finish line just to get some feeling with the bike to learn for some experience. Anyway, we will test, I think on Friday we will go riding with the team to try and improve somethings and hopefully this will show on Sunday.

Covington (19th overall): Today I felt a lot better and again made small steps forward. It’s still not where I’d like to be results wise but really happy with the progress we’re making. I am looking forward to the last race in Faenza on Sunday.