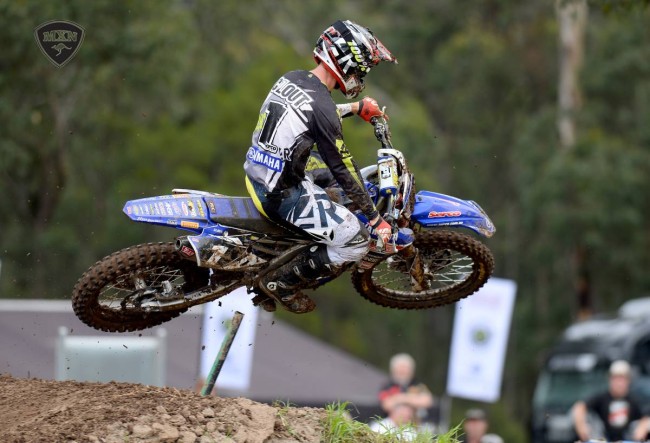 On home soil, and in front of family and friends, Serco Yamaha’s Luke Clout sealed the deal on his first overall win for 2015 at round two of the MX Nationals at Appin today.

Clout, who had a fight on his hands from the minute the gates dropped, went head to head with JCR Yamaha’s Jay Wilson over two action packed races, eventually claiming the overall round win on a count back.

Over both motos, Wilson and Clout banged bars, and provided fans and spectators with some of the most thrilling racing action that Appin has seen in years.

Wilson, with ‘4 Dee’ stitched onto his butt patch, was a man on a mission in moto one, taking line honors ahead of Clout and Husqvarna’s Nathan Crawford.

By the time the gates dropped in moto two, Wilson took the hole shot and early lead – looking ready to wrap up the overall. However a late charge from Clout saw the Yamaha mounted local snatch the lead from Wilson, and in turn the round win.

With Clout wrapping up the win in race two, JCR Yamaha’s Wilson crossed the line in second and earnt himself second overall for the round.

Veteran Kawasaki rider Takeshi Katsuya took third place respectively in moto two, however was unable to secure a podium position, with Crawford collecting third overall for the round.

Clout shared his excitement on the podium, thrilled to have reclaimed the Motul MX2 red plate, and recording his first overall victory for 2015.

“Today was one of the best days racing I’ve had in about ten years,” he said.

“Going wheel to wheel with Jay in both motos and leaving the field and having our own battles was really cool – I think the crowd definitely got their monies worth today.

“The Serco Yamaha team has stuck behind me for years now, and it’s been awesome having their support, especially at this round, being my home track.

“All of my family and friends have been here to support me too this weekend, so to get the win at this round is pretty special – I’m stoked, and hopefully now we can just keep charging forward with this championship.”

To check out how the rest of the Motul MX2 class went today, and to re-watch all of the action from every race at Appin, tune in on Wednesday night via www.nrgtv.com.au for all of the racing available on demand!

For a full list of results head to www.mxnationals.com.au