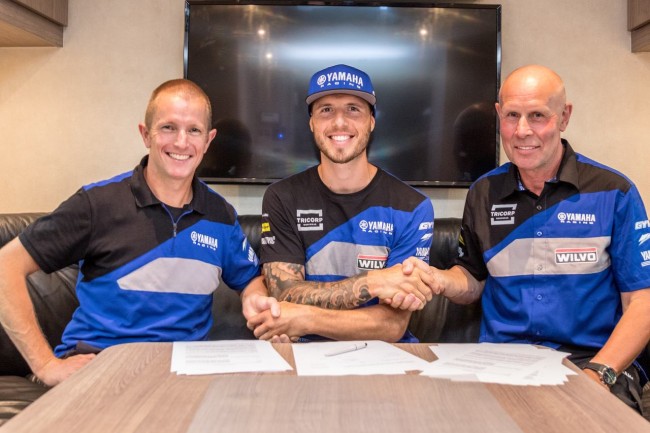 It’s an exciting time for the Wilvo Yamaha team and team owner, Louis Vosters as they become the full factory Monster Energy Yamaha team for the 2020 season. After Jeremy Seewer left the team at the end of last season to join what was then the full factory team, he will now be back working with his former team.

The full factory Yamaha team have a very strong line of of Gautier Paulin, Jeremy Seewer and Arnaud Tonus to take on the 2020 MXGP World Championship.

Team owner, Vosters revealed he knew back in 2017 that he’d become the full factory team for the 2020 season.

“I received more or less, one and a half years ago (in 2017), the call that we would become the factory team in 2020 onward. It was great news, I was really excited. Also, the feeling and working with the guys from Yamaha, there’s such a good feeling – like a family for the long term”, Vosters stated.

“For us and for me, it’s a great step forward. Jeremy Seewer comes back to us, to our team. He’s the vice world champion and especially during the second half of the season, he was really good. I am looking forward to having him back on board. With three three riders (Gautier Paulin, Arnaud Tonus, Jeremy Seewer), we have a great line up”, added Vosters.

Vosters also discussed how he got the chance of running his own team after sponsoring riders and teams for a number of years.

“I started my career at Wilvo, I sponsored quite a lot of riders but afterwards I became title a sponsor in several teams such as Husqvarna. I think it was in 2015 that I decided I was ready to run a team on my own. In the beginning, I was together with Tim Mathys at Standing Construct. Afterwards, he took the decision to pull back and concentrate on his company. From that period on, I was running my own team. It was a nice challenge and after one year I moved to the MXGP from the MX2 class. I’m really happy I made that step”.

Watch the cool video that focuses heavily on the team: