Lorenzo Locurcio on his EMX250 debut 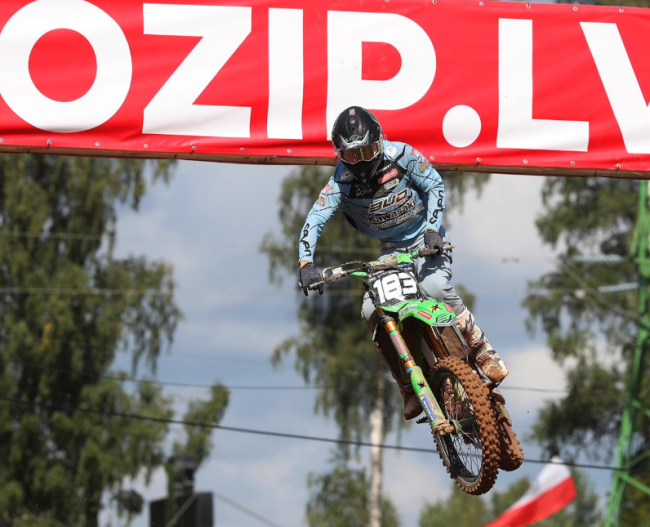 Lorenzo Locurcio, BUD Racing Kawasaki’s new signing from Venezuela, made an impressive European debut with two fighting rides to take eighth overall in the Latvian round of the FIM EMX250 series.

The Venezuelan, who arrived in Europe less than two weeks ago, proved just how quickly he has adapted to the strange environment as he stormed through the pack in both motos after starting outside the top thirty each time. Not acquainted with the European flying-lap qualification system the newcomer only earnt thirtieth gate-pick, a severe handicap at the sandy Kegums track with its sharp 180 degree opening turn. Thirty-third on the opening lap of race one he advanced no less than twenty-one places during the following thirty minutes to take the chequered flag in twelfth position, less than two seconds from tenth, after posting leaderboard lap times throughout the moto even though he was continually eating roost in traffic. A repeat show in the second moto saw Lorenzo charge from thirty-first to eleventh and deservedly earn eighth overall on the day.

Lorenzo Locurcio: “It was tough. The track was very slippery so that took me a while to get used to; qualifying was difficult so I had an outside gate which meant I got bad starts and was coming from outside the top thirty to finish twelfth in the first moto and eleventh in the second for eighth overall. I can’t complain but I know I’ve got more and I’m ready to improve on my speed. It will be perfect if they don’t change the track too much for Tuesday; I’m looking forward to it.”

Teammate Pierre Goupillon, sixth in his qualification group, found himself tailing the pack by half a minute after being knocked off by another rider a few corners after the start of race one. The Frenchman turned leaderboard lap times for a couple of laps before another rider hit his front wheel and damaged the front disc brake. A top ten start in race two promised a successful race but he was again hit by a rival on lap three to drop out of the top twenty; he had already recovered to fourteenth with eight minutes still to race before another incident forced his retirement.

Pierre Goupillon: “In the first moto another rider cut across my line on the first lap and I crashed. I was coming back when another rider hit my front wheel; I had no more front brake and was forced to retire. My second start was good, but again someone hit me during the race and once more I had to regain positions until another incident forced my retirement. It was a frustrating weekend, but we’ll regroup for the next race on Tuesday.”

The next round of the series will take place at the same venue with a revised track layout on Tuesday.