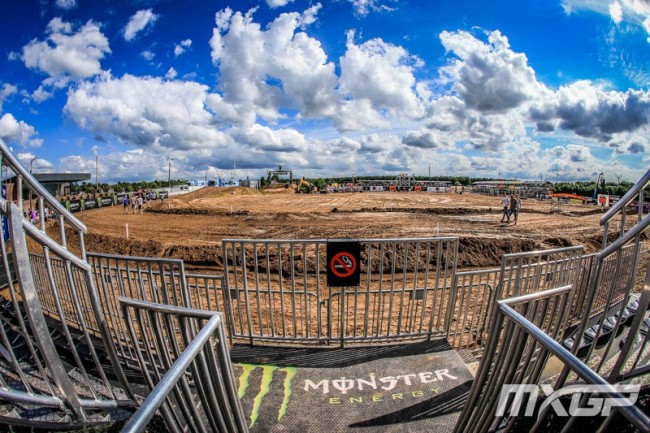 Some riders love it, some riders hate it but this weekend hosts the toughest GP of year at the tough sandy circuit at Lommel.

When the gate dropped for the MX2 moto it was shaping up nicely with Anstie at the front with Ferrandis and Seewer right in behind him. It was a frantic first few laps in the moto starting with Seewer passing Ferrandis for second on the first lap. Ferrandis had a disaster of a first lap first with getting passed by Seewer, then crashing and dropping down the order to tenth.

Meanwhile, Anstie was leading the pack out in front and looking good but then on the second lap disaster struck! Anstie made a silly mistake and fell down the order. This gifted the lead to Seewer.

Ferrandis had another shocker and crashed yet again! He was back to fourtheen spot with it all to do. At the front, Petrov made a move on Bogers for second and caught Seewer for the lead.

Ferrandis and Anstie couldn’t deal with the pressure, would Seewer fall victim or hold on? In truth he looked great out in front and dealt with anything that Petrov through at him, a great qualification win the for the Swiss rider who has really stepped it up in 2016.

It was all going on further down the pack. Conrad Mewse was buried down in eighteenth on the first lap but put on a charge through the field and was the fastest rider on the track at one stage! He even made a move on Ferrandis but the fiesty French man responded and that seem to wake him up. Mewse eneded up in ninth which is a good ride considering he was so far back.

If I had to pick one rider that could surprise us all in 2017 then it’s got to be Brent Van Doninck, with a full off season behind him he could be very dangerous. He has only been back on the bike for a week and a half – a surperb performance in front of his home crowd to end up in fourth.

HSF Logistics rider, Calvin Vlaanderen loves the sand and he put in a good ride to finish in fifth, he has had a lot of bad luck lately but will hope to put that behind him with a strong ride tomorrow.

Dylan Ferrandis and Max Anstie ended up in sixth and seventh respectively after their mistakes cost them but decent recovery rides.

I want to give a mention to Karel Kutsar who finsihed down in thirteenth but on a standard KTM that is impressive, he was riding the wheels of it.

In the MXGP class it was Jeremy Van Horebeek that set the quickest time in timed practice to get his home crowd excited, would he be able to win?

In this class the starts are so important, more so than ever with the talent in the class. Tim Gajser’s starts have been one of his strong points this year and yet again he pulled another hole shot with JVH right there in second with the delight of the home crowd. Those two quickly pulled away from the rest of the pack but it was all going on behind them!

Romain Febvre was in fourth but then in the second lapped made a mistake and was all the way back in twenty-ninth position. After that he seemed to ride angry and was on the move up in eighteenth when he crashed again! A victim of a very gnarly, rough track.

Kevin Strijbos put on a good show at his home GP coming from seventh to finish in third and looked strong at the end. Clement Desalle keeps improving every GP but when it comes to sand you never really know what you will get sometimes but he was strong today and ended up in fourth.

As the race went on Cairoli and Simpson seemed to get stronger, they both charged through the pack from bad starts. At the end of the moto Simpson was the fastest rider on the track which shouldn’t be a surprise as he won at Lommel in 2015.

I have to say I am really impressed with Suzuki’s new kid on the block, Arminas Jasikonis. He was on the gas and passed some top riders including Coldenhoff who won a GP in 2015! He ended up in a fantastic eighth position which will do his confidence the world of good.

Tomorrow is a new day and the track will be even rougher but the start will be key. If Cairoli, Simpson or even Nagl get out in front of Gajser they could take the win and JVH shouldn’t be discounted as he has the speed.