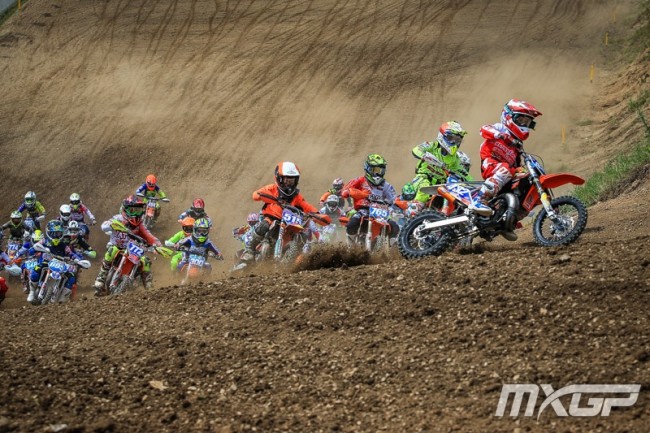 People can’t imagine how impressive it is to see 65cc and 85ccbikes ripping around a grand prix circuit. It’s nothing short of awesome and with the European Championship EMX65 and EMX85 finals taking place at the MXGP of Czech Republic, in Loket, today, the world has been gifted a sneak peek at the future of motocross.

Following in the footsteps of MX2’s vice world champion Pauls Jonass; another young Latvian has burst on the scene in the tiny form of Edvards Bidzans. Bidzans was pinned on his KTM65 today. He won the final moto and was crowned European Champion in the 65cc class.

The 85cc class was swept clean by Austrian Rene Hofer who won both races by miles for the EMX85 crown.

Joining the premier classes, MXGP and MX2, and the young guns in the EMX65 and 85 divisions, the fifth round of the European Championship EMX300 Presented by FMF Racing took place where Mike Kras, the red plate holder, has strengthened his grip on the championship with his first overall victory of the season.

In the European Championship EMX65 yesterday, young Dutchman Ivano Van Erp was on rails. He pulled a massive ‘holey’ and cleaned up for a convincing win in the opening race. Dane Mads Fredsoe also put in a good ride for second ahead of Latvian Edvards Bidzans, who finished third.

While Edvards Bidzans didn’t win the first race yesterday, he did set the world on fire with his super sick riding style, and amazing skill set, as one of the only riders to clear the finish-line jump. Bidzan proved what a good start can do in Race 2 when he took the holeshot and checked out for a huge race win, even though he did stall the bike at one point.

The battle for second was pretty epic. Belgian Yoran Moens was tapped-out for the majority of the race but a little mistake knocked him back to third with Dutchman Sem De Lange capitalizing.

No one was riding harder than Matteo Russi who crashed out of fourth but bounced back to pass HungarianLaszlo Tecsi with three laps to go. The raw determination of Russi was obvious as he charged after the Belgian star, Moens.

With two laps to go Russi launched the step up and passed Moens for third in impressive style. The Italian’s speed made for a nail-biting finish with only a hair splitting him and the kid who finished second, De Lange. Moens held on for fourth ahead of Tecsi who fell on the last lap but managed to hold onto fifth.

After his win in Race 2, paired with his third place in Race 1, the young Latvian Edvards Bidzans struck gold this weekend and was crowned the 2016 European Champion in the EMX65 class. Italian Matteo Russi will go home as the vice-European Champion while Sem De Lange, from The Netherlands, rounded off the podium.

There’s nothing like a bunch of kids wringing the life out of their 85cc bikes. Yesterday, Austrian Rene Hofertook a spectacular win over Sweden’s Anton Nagy and Spaniard Oriol Oliver, while in Race 2 today, it wasEddie Jay Wade who got the jump but spun out before the end of lap one which handed the lead to Anton Nagy who had Hungarian Adam Kovacs on his case. Kovacs pulled up on Nagy to pass for the lead, which was eventually handed to him after Nagy landed in the biggest hole on the track and was bucked over the bars.

Meanwhile, the race one winner Rene Hofer started to pick up the pace and came around for lap three in second place ahead of Alessandro Facca, Oriol Oliver and Tom Guyon. It wasn’t long before Hofer dropped the hammer and charged it up the inside of Kovacs to take the lead and from there, never looked back.

Kovacs sat second for the entire race with a comfortable gap over Facca and Oliver, who were having an intense battle for third. In an odd turn of events, Kovacs either had a bike problem or he was spent because he faded back to fourth on the final lap. Meanwhile the battle between Facca and Oliver raged on as Oliver threw everything but the kitchen sink at Facca.

Facca managed to hold on for second forcing Oliver to settle for third ahead of a disappointed Adam Kovacs. Tom Guyon was fifth.

At the end of the weekend, Rene Hofer was rewarded the gold plate as the clear winner of the 2016 EMX85 Championship, while Oriol Oliver and Alessandro Facca rounded out the top three for this season, in that order.

Over the last few years the EMX300 Presented by FMF Racing class has picked up some serious momentum. Fans love it because it helps motocross stay true to its roots, and seriously, who can resist the sweet smell of pre-mix? Racers love it because it gives talented riders the opportunity to race on the world stage, which helps the likes of the championship leader, Mike Kras, one rider without a big team behind him, the chance to prove he’s got the goods, which is exactly what he did this weekend with his first overall victory of the season.

In Race 1 yesterday, GL12 Yamaha’s duo of Brad Anderson and Lewis Gregory were on another level. Both Yamaha boys came from behind to finish first and second in that order, ahead of Mike Kras who was third.

Race 2, today, might have been the most action-packed EMX300 Presented by FMF Racing race of the season. It had everything, drama, excitement, devastation and heartbreak. The championship leader Mike Kras managed to extend his points lead this weekend with an emphatic victory in Race 2 which landed him on the top step of the podium for the first time this season. It wasn’t an easy feat for the Dutchman who took a while to pass the Czech superstar Petr Bartos, for the lead, but managed to make it happen when it mattered most.

Kras took the checkers and now leads the championship by 15 points with only one round to go, “This was a very important race to win,” he said, “now I don’t need to win at the last round in Lommel, I just need to stay on two wheels.”

The local legend, Petr Bartos, was the super spoiler this weekend and held Rockstar Energy Husqvarna’s Yentel Martens off for second place in the race and second overall. A mega frustrated Martens, who finished third in the race and third overall, said, “I gave everything I had, but it just wasn’t enough, anyway I will fight for the championship to the end.”

It was a devastating end to the season for the runner-up in Race 1, GL12 Yamaha’s Lewis Gregory, who crashed out of the race on the opening lap, while his GL12 Yamaha teammate, and Race 1 winner, Brad Anderson also faced a heart-breaking loss after scrapping his way from outside the top 20, into fourth and on the heels of the leaders, only to have his bike let-go with 3 laps to go. A first place and a DNF left him in sixth overall, but you have to tip your cap to the Brit; he was absolutely hauling this weekend.

The drama didn’t stop there. Thomas Marini and Matt Moffatt collided on lap one. Both riders went down. Moffatt managed to bounce back for fifth, behind another Czech hotshot, Vaclav Kovar who finished fourth after crashing on lap three.