Livia Lancelot on her new challenge! 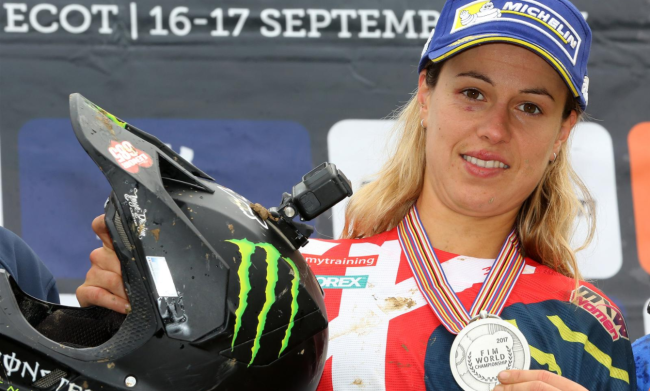 Double World Champion and multiple French Champion, Livia Lancelot competed in her last race two weeks ago during the final round of the FIM Motocross Women World Championship. After twenty years of racing, including twelve seasons at the highest level, the charismatic Livy will embark on a new challenge in the coming weeks.

Doing most of her career with Kawasaki, Livia claimed numerous successes on a lime green bike, and she will keep working as part of |Team Green until the end of French Beach Race series.

But for such an active woman this project is not enough and Livia reached another dream as she will become the manager of a team involved in the MX2 World Championship.

“For a few years I have been riding with my own Team 114, and my dream has always been to enter the MX2 World Championship. Of course it would have been really great to do this with my current partners, but the involvement in the MX2 class is different than WMX so there is no possibility to continue with all of them and especially Kawasaki.

We had a long and successful story together since 2007, and I really want to thank Kawasaki Europe, Kawasaki France, Steve Guttridge and Fred Bassaler for their support during all these seasons and I think that we can be proud of what we achieved together,” she explained.

Not ready yet to spend time far from the tracks, Livia finally reached an agreement with another brand to continue her activities with team 114.

“Everyone in the industry knew that my project was to remain team owner/manager in the future, now another manufacturer is interested in that project and has decided to work with me. My new team will be involved next season with two riders, Hunter Lawrence and Bas Vaessen, who will enter the MX2 World Championship. It’s a kind of challenge to enter the MX2 World Championship with  a new manufacturer, but they are really motivated and I will give 110% on this project, as I did when I was a racer,” she concludes.