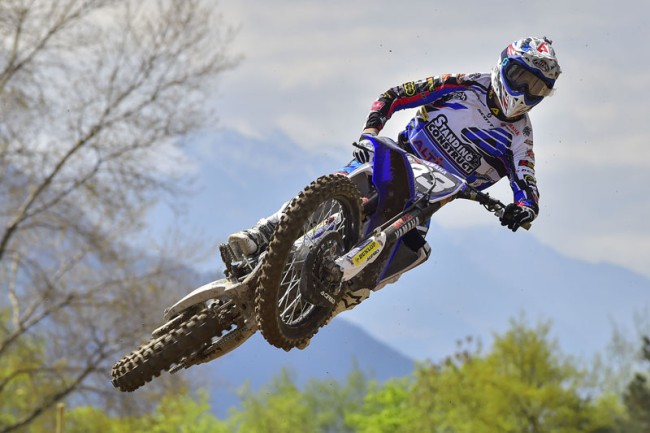 Yamaha Motor Europe are pleased to announce that Julien Lieber will remain on the YZ250F and as part of the formidable Standing Construct Yamaha Yamalube racing team for the 2016 MX2 FIM Motocross World Championship. The 20 year old (21 in June) is negotiating his fifth season of Grand Prix competition in 2015 and has already set a small milestone by obtaining his first podium finish, secured at the opening round at Qatar.

Lieber’s progress under the auspices of the Belgian team run by Tim Mathys have been one of several positive narratives for Yamaha in the six rounds of the MX2 campaign so far. The crew celebrated their first GP win with the YZ250F thanks to Valentin Guillod – who has to depart MX2 next year due to his 23rd birthday in December – and have eyed Lieber to continue his speedy evolution in the category for the future and more spoils in Blue.

“We’ve been working very hard with the team to get the race bike how we’d like it so we can try for the best results in MX2,” Julien said. “I feel happy being here and it is great to confirm that we will be together for 2016. I don’t know yet how the team will be structured but I know the riders here are treated well and there is not the feeling of a ‘number one’ or ‘number two’. We’ll continue to do what we can now this season and always aim for the best.”

“Julien started the year in great form and has a lot of potential on the YZ250F,” commented Yamaha Motor Europe Motocross Racing Manager Erik Eggens. “Standing Construct have been pushing very hard with their development and the high standards with which they go racing and Yamaha could not wish for better partners than that. I think we have established an excellent base with both the team and Julien and it makes perfect sense to keep him as part of our set-up and plan to continue to build Yamaha’s presence through the levels in world and European Motocross.”