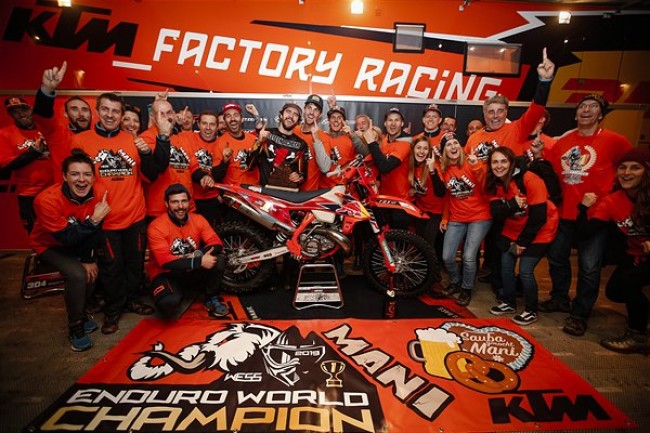 KTM racer Manuel Lettenbichler was crowned the 2019 WESS Enduro World Champion at the eighth and final round of the series held at the GetzenRodeo in Germany on 2 November, where he rode his KTM 300 EXC TPI to victory in front of a home crowd.

In what turned out to be a thrilling closure to the WESS Enduro World Championship season, the GetzenRodeo tested all riders with one of the toughest courses seen in this year’s series. Beginning with a two-hour qualifier, which decided the 20 riders who would go through to the afternoon’s final, it ended with a brutal 80 minutes plus one lap extreme main race. Lettenbichler’s qualifying win cemented his name in the history books as he secured the WESS title.

For the main race Lettenbichler delivered a winning performance stamping his authority as the newly crowned WESS Enduro World Champion. The German racer was only once challenged for the lead by Red Bull KTM Factory Racing star Taddy Blazusiak, who stormed through the field to finish with a podium third at the event and fourth in the standings. Lettenbichler reached the finish line after completing the gruelling final Red Bull X-Loop visibly exhausted and emotional as celebrations began for his incredible championship winning season.

Red Bull KTM Factory Racing’s Jonny Walker finished the event in sixth position aboard his KTM 300 EXC TPI to confirm third place in the overall championship standings following a 2019 series that tested the riders’ abilities across a number of different enduro disciplines. In the quest to highlight the most complete enduro rider, the 2019 WESS Enduro World Championship included famous races such as Trèfle Lozérien, ErzbergRodeo Red Bull Hare Scramble, Red Bull Romaniacs, as well as Hawkstone Park Cross-Country race. In addition to the GetzenRodeo, Lettenbichler won Red Bull Romaniacs whilst taking a number of podium finishes during the season. A pivotal moment for the 21-year-old was perhaps his second-place result at Hawkstone Park aboard his KTM 350 EXC-F, despite his expertise and preference being in the hard enduro discipline.

Manuel Lettenbichler: “I’m over the moon, I can’t describe it. To be honest I nearly cried on the podium. It was such a long, tough race today and it’s been such a long season. To finish the year with a first place in front of my home fans would have been amazing, but to win the championship as well is unbelievable. I’m on top of the world right now. My plan for today in both races was to get away well and try to control the race from the front. I was a little nervous in this morning’s race but thankfully it all went to plan. I was honestly exhausted in this afternoon’s race – I couldn’t have given any more. When Taddy passed me, I knew I had to dig deep and carry on and thankfully I managed to get past him again and make it to the finish. The fans have been amazing too– I hope they enjoyed the race as much as I did.”

Robert Jonas (Vice President Motorsports Offroad): “We’d like to say a huge congratulations to Manuel on becoming the WESS Enduro World Champion. Manuel has shown maturity beyond his years in his racing, as well as how adaptable he is as a rider throughout the season with his impressive consistency. We could see in 2018 that he would be strong again this year and thanks to his talent, hard work, the guidance from his father Andreas, as well as the support from KTM, Manuel has been able to put everything together to win this title. I think a highlight for him was taking a second-place podium finish at Hawkstone Park, which was perhaps not the type of event he expected to enjoy such strong results at, but this just shows how versatile he is as a rider. Overall, it’s been fantastic to see the WESS Enduro World Championship grow this year with such a huge interest both at the races and in terms of viewing figures – it’s an extremely dynamic, interesting and competitive championship that challenges riders with its different types of events and we are very proud to be part of it.”