Less than two weeks to the Lille supercross! 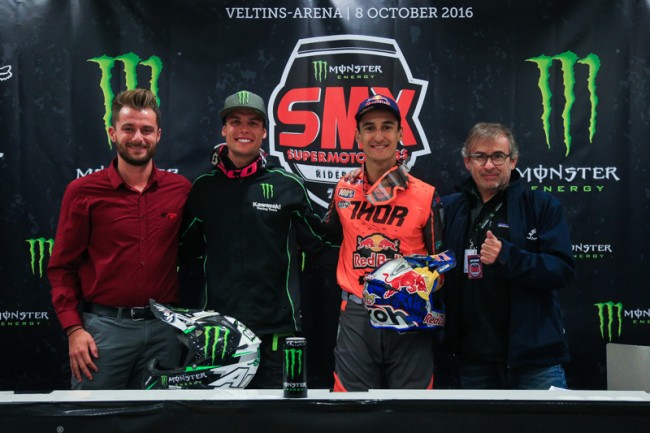 For the third year in a row, the Paris Bercy Supercross will move to Lille in the modern Pierre Mauroy Stadium for two nights of racing and show. On November 12th and 13th, Lille will become the capital of the European Supercross and will line up some of the top SX riders.

On the podium at the SMX and more recently at the Monster Cup in Las Vegas, Marvin Musquin will be back racing in France for the first time since the MX of Nations last year. Marvin will discover this new stadium, and will be for sure one of the main contender for the overall win; the factory KTM rider raced several times Bercy, and could become the fourth French ‘King of Bercy” after Jean Michel Bayle, David Vuillemin and Christophe Pourcel. For sure he will have thousands of fans cheering him in the stadium, as it was at the Nations in Ernée.

Another Frenchie will be supported by the fans: Romain Febvre. The 2015 MXGP World Champion was impressive in Lille last year for his first Supercross experience, and of course he is back stronger; his season was not as good as the previous one due to a crash during the series, but Romain shows at the Motocross of Nations and during the SMX that he is back to his best level. Third leader of the French Team, Jordi Tixier also show during the last SMX that he’s able to race with the fastest American riders and knows what to expect in Lille. These three Frenchies will be as usual joined by the French SX specialists, who raced successfully all-over Europe: Fabien Izoird, Cedric Soubeyras, Thomas Ramette, Xavier Boog, Valentin Teillet, Maxime Desprey, Cyrille Coulon and much more as this race is part of the French SX Tour.

Americans have always enjoy racing the biggest European Supercross (they won 24 of the 33 editions of the event!) and they remain unbeaten since eight years’ now! Twice winner in Bercy Justin ‘BamBam’ Barcia will be the leader of team USA, even if he just switches bike as the JGR team moved to Suzuki. Justin had a great weekend in Lille two years ago, but didn’t won the overall and is looking for some revenge… His teammates will be Malcom Stewart who enjoyed so much racing the French event last year, and Christian Craig walking on the footsteps of his father Mike who came several times racing in Europe; both Malcom and Christian will move on 450 Honda for this event, and will try to bring back home the team’s trophy that France claimed last year.

The track map for the Lille supercross.

European riders coming to Paris Lille are usually not so used to race Supercross events, but both Arnaud Tonus and Tommy Searle have this strong experience. Tommy just did one of his best season, claiming a British title and some top MXGP results, while Arnaud recently switched successfully on a 450 with top ten results at the last MX of Nations. Back to the GP’s next season he will do his first race on a Yamaha, while Brian Hsu, one of the best European prospect, will do his first appearance on a Husqvarna.

Two other classes will be part of the program in Lille, with a 125 and a SX2 class, both rounds of the French SX Tour. In the SX2 class the fastest Frenchies (such as Florent Richier, Thomas Do, Yannis Irsuti or Brian Moreau just to name a few) will be joined by several wild cards: American’s Ryan Surrat and Jake Masterpool, Italian’s Lorenzo Camporese and Kevin Cattani, British Joe Clayton. With the 125 class also racing, the two stroke fans will be delighted too!

FMX has always been a great part of the show in Bercy and now in Lille, and there’s no reason to change that! Some of the FMX Legends will be there, such as Edgar Torronteras and Mat Rebeaud but we’ll have also Genki Watanabe representing the Japanese school, Brice Izzo and David Rinaldo. They will bring some astonishing best tricks, and that will be huge!

You can buy tickets here.