Lesiardo on his EMX250 title win! 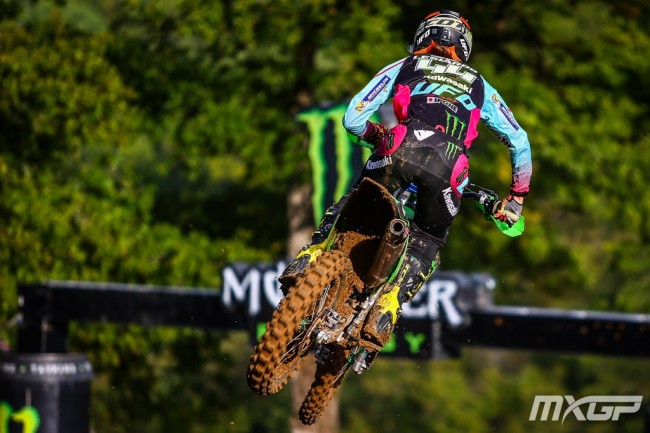 The Italian youngster faced a difficult opening moto as he started way down the field in twenty-fifth position in heavy rain, but he persevered to advance to thirteenth at the finish to ensure that the title was mathematically secure. Relieved of the pressure of securing the title he quickly swept into the lead of the second race on Sunday morning, but conditions were still very heavy and he was unable to reach the chequered flag after an incident on the final lap but conditions were so difficult that he was still classified fourth behind the only three riders to complete the full distance.

American Tristan Charbonneau of Bud Racing Monster Energy Kawasaki showed just how much he has learnt of European racing conditions on Saturday when he defied the rain to win the opening moto after leading almost throughout the race. A poor start in Sunday unfortunately restricted him to thirteenth place, missing the weekend podium by a single point but the scoreline was sufficient to secure fifth in the final series standings, one place ahead of teammate Marshall Weltin.

Morgan Lesiardo: “It’s awesome to win the European title; it was an incredible season for me! When I joined the Monster Energy Kawasaki MX2 Racing Team during the season I had to get used to a new team, a new bike, new people and during the first few weeks and races it was not easy for me. But we learnt how to work together and we finally reached our goal, winning the championship! This weekend was difficult; I struggled with the track but in the second race I wanted to end the season with a good result and came back from last to first, but we had a little issue in the last lap and couldn’t finish the race. But I was happy with my riding, and even if I didn’t win this moto it was great to clinch the title here!”