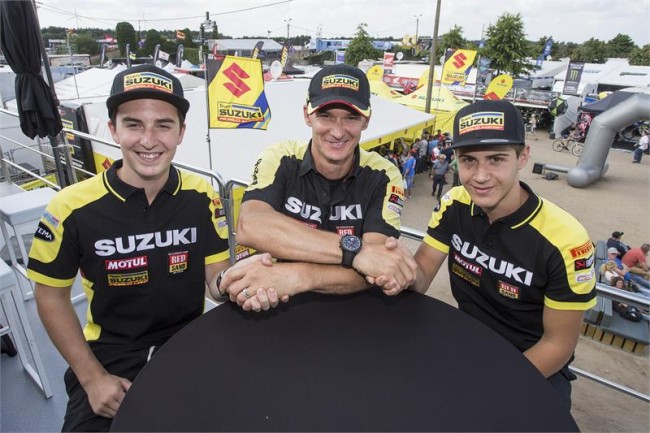 Suzuki has strengthened its strategy for the future and through the establishment of the Team Suzuki World MX2 team as a stage for promoting and developing young talent with a fresh set of alliances for 2017 and beyond.

With current rider Jeremy Seewer second-placed in the FIM world championship standings already slated for a final MX2 term in 2017, and EMX250 European Champion race winner Bas Vaessen also confirmed for the Grand Prix class, Suzuki is thrilled to be able to incorporate Australian Hunter Lawrence into the GP structure as a third rider on the RM-Z250.

The Antipodean will bring his highly-rated younger brother, Jet, slated for European Championship duty, while Suzuki’s substantial profile in EMX250 – the feeder class to Grand Prix and the final step on the career ladder for MX2 aspirants – is boosted by the signature of Zach Pichon (the son of former double 250cc World Champion on the RM250, Mickael Pichon) to continue in the category.

Everts had already moved to secure Seewer and Vaessen for a potent 2017 MX2 wing, but the addition of 16 year old Lawrence, a winner in EMX250 in just his first season this year – and before he was hit by a right knee injury that prematurely ended his European campaign – only adds more potency.

“After Jeremy and Bas, we are very honoured to sign Hunter Lawrence,” said Team Suzuki General Manager Stefan Everts. “We had a great opportunity to work together and thinking about the future and what I have seen of Hunter so far, he will fit in perfectly to our programme. After one-or-two years I feel that he can be a really strong contender in the world championship. He was really strong in his first races in the European Championship and he adapted very fast to Euro tracks. So I’m very pleased to have this kid on-board and also his brother [Jet]. We have changed quite a lot with how we are working with the riders and it has already started to pay off in some respects and results; Bas is showing good things and Jeremy is improving a lot. For the Lawrence family I think it was important the trust and resources we could provide and they are really happy to come on-board. I hope this is the next step for us in building up the whole Team Suzuki structure.”

Lawrence is a former 125cc Junior World Championship ‘podiumee’ and national junior number one and was highly sought after in the Grand Prix paddock for his talent and application for a maiden MX2 attempt in 2017; which will be the first of two years in ‘yellow’.

Brother Jet was 65cc Junior World Champ. “For Jet and it’s quite something to have stood out enough for Harry and Stefan; we’re talking 15 world titles between them so there is quite something to be learned there,” the confident youngster said. “My knee is coming along well and I’m cycling and exercising. I think I might be on the bike in mid-September and it will be great to start working with the team and get a good feeling with the RM-Z250 then. It will be a crazy-long season next year and I don’t have any expectations; I know how important it is to try to keep healthy and make it all the way through.”

Zach Pichon has caught the eye this season and in 2015 with his initial forays in EMX125 competition thanks to a speed and style that could well be a family trait. The teenager, who turns 16 at the end of the summer, will contest the highly-competitive 10-round European series as well as dates in Holland and the ADAC MX Masters national championship in Germany.

“This is a quite a big deal for my family because my father was two-time world champion with Suzuki,” Pichon says. “I like the bike and I feel great on the Suzuki. It was an easy and quick decision to join the team. I am doing more riding and cycling and running this year and working with my Dad he knows how I feel…so we are improving.”

Stefan Everts has many memories of close and intense tussles with Zach’s father and now the story circles around to the next generation. “We meet again after some years!” the Belgian smiles. “And now in a completely different position. I saw Zach when he was a little kid and Mickael and I were racing each other and now I am taking care of his son. It is a really cool story and it is nice to join up like this again. I always had a lot of respect for Mickael; he is a special personality and we have a lot of stories! Zach is a completely different rider and character. I think all the experience around him – with Mickael and I and my father – he will have the help he needs to become a champion. Who knows? Maybe in a couple of years we will see another generation of Everts-Pichon battling on the track!”

The sizeable quota and mix of youth, promise and podium experience at the highest level means the culmination of Suzuki’s long European-based relationship with Brian Hsu. The 18 year old German is optimistic of joining Suzuki’s effort in the United States for 2017. “Brian wants to go to the U.S. so Suzuki is helping him to find a deal there,” Everts concludes. “It was his wish from the beginning and now he has turned 18 I think it is the right time for him to go. We had a difficult year and we wished it could have been better.”