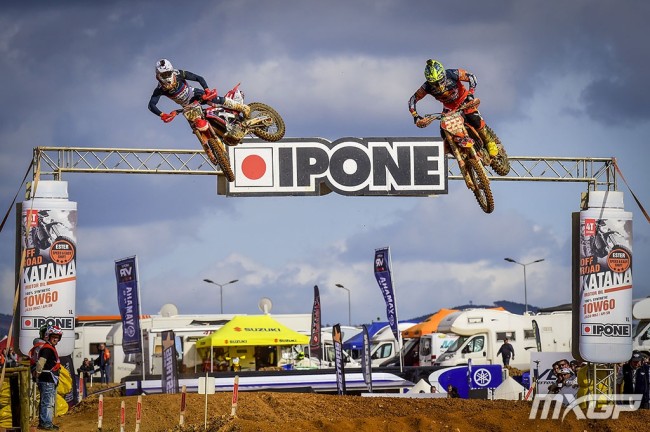 KEGUMS (Latvia) 12 June 2019 – MXGP will return to the beautiful circuit of Kegums this coming weekend for the MXGP of Latvia and the 9th round of the 2019 FIM Motocross World Championship is really starting to heat up. The Latvian circuit sits nicely in a forest area, 50 kilometres from the city of Riga and it is one of the favourites of the MXGP paddock. Sandy based, with good technical sections, Kegums is the perfect place for the MXGP and MX2 championships to continue the 2019 journey. Last weekend in Russia we saw the dominant performance of Team HRC’s Tim Gajser who managed to grab the MXGP Red Plate 13 points ahead of Red Bull KTM Factory Racing’s Antonio Cairoliwhile Red Bull KTM Factory Racing’s Jorge Prado continued his title chase in fashion.

The Latvian round will also host the FIM Europe Motocross Championships of EMX250 and the EMX2T presented by FMF Racing. Last weekend in Russia it was Dutchman F&H Kawasaki rider Roan Van De Moosdijk who took victory, while Stephen Rubini of the Honda Redmoto Assomotor team took the red plate and the lead in the series points. In the EMX2T Presented by FMF Racing Todd Kellett took the round win for the first time and Verde Substance KTM’s Brad Anderson took the red plate out of Russia.

Prior the PATRON MXGP of Russia the MXGP class was dominated by Red Bull KTM Factory Racing’s Antonio Cairoli. However, Team HRC’s Tim Gajser, who went1-1 for third GP in a row, heads now to Latvia with the red plate and a handy points lead over Cairoli, but the Sicilian heads to Kegums, a track where he has won 4 times and has finished second in 4 occasions, determined to keep his momentum. Cairoli finished 2nd last year in Latvia while Gajser ended 5th.

The podium in Russia saw two Yamaha riders in second and third position, Monster Energy Wilvo Yamaha Official MXGP’s Arnaud Tonus and Jeremy Seewer from Monster Energy Yamaha Factory MXGP team. The pair of Swiss made history as for the first time two Swiss riders were standing on the podium in the MXGP class. Seewer is now 4th in the MXGP Championship while Tonus, after finishing on the podium at the last three GPs, is now running 7th just 2 points behind Monster Energy Kawasaki Racing Team’s Clement Desalle, who is obliged to miss the MXGP of Latvia due to injury. Updates on Desalle’s conditions will be given shortly.

A lot of interest was around the comeback of Red Bull KTM Factory Racing’s Jeffrey Herlings, who finished fourth overall in Russia and goes into Latvia as a real contender for a GP victory, or at least a podium finish. Jeffrey Herlings won his first ever MXGP overall in Kegums in 2017 and topped the MXGP of Latvia in 2018, too.

Rockstar Energy Husqvarna Factory Racing’s Pauls Jonass, who obtained two solid second positions in Latvia the previous two years in MX2, is willing to show some good speed this weekend as he will be racing in front of his home crowd for the first time in the MXGP.

Last year’s podium finisher Monster Energy Wilvo Yamaha Official MXGP’s Gautier Paulin is another rider to watch, as he has never missed the Top 10 in the previous 8 editions of the Latvian GP. The French rider is sitting now 3rd in the championship standings.

In the MX2 class it is Red Bull KTM Factory rider Jorge Prado who has shown amazing speed going 1-1 in almost all the races and extending his MX2 championship points lead event after event. Prado raced in Latvia in 2017 and 2018 but he has never reached the MX2 podium. The Spanish will line up for a career first GP win in Kegums.

Rockstar Energy Husqvarna Factory rider Thomas Kjer Olsen finished second overall last weekend and looks to be unbeatable on the Kegums track after having won in 2017 and 2018. On the other hand, Monster Energy Kemea Yamaha Official MX2 team’s Jago Geerts, who had his first MX2 podium in Latvia last year, once again found himself on the podium in Russia and he is getting stronger and stronger as the season rolls on. Both Olsen and Geerts beat Prado in Latvia last year and are heading towards the sandy track of Kegums full of confidence.

Other riders who are looking forward to racing in Kegums this weekend are F&H Kawasaki’s Henry Jacobi, Honda 114 Motorsports team’s Mitchell Evans and Red Bull KTM Factory team’s Tom Vialle who will give their best to impress everybody and finish on the podium. However, everybody will have to watch closely sand specialists Davy Pootjes from DIGA Procross Husqvarna team or Monster Energy Kemea Yamaha rider Ben Watson as they will not leave things easy for the rest of the MX2 contenders.