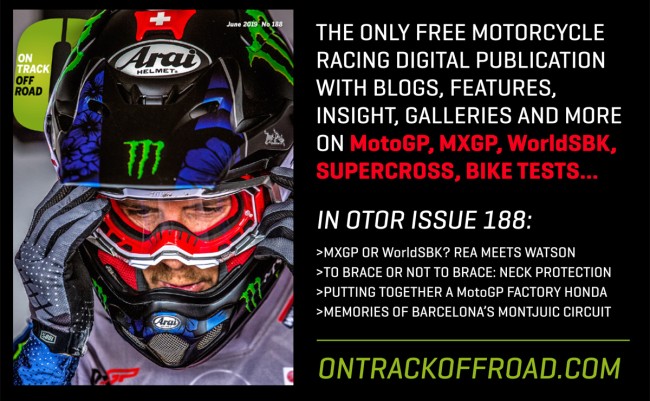 The seventh 2019 issue of a monthly motorcycle sport magazine with some of the best interviews, features and Blogs from the heart of MotoGP, MXGP, AMA Motocross/Supercross and WorldSBK as well as tests and reviews of bikes and products from the motorcycling industry.

In OTOR #188: MXGP or WorldSBK? When WorldSBK Champion Jonathan Rea met MXGP starlet Ben Watson what did the British stars talk about? We pushed ‘record’, asked a couple of questions & listened.

Necking it: the status; we speak to a host of Grand Prix riders as well as the FIM and neck brace innovators Leatt about the role and position of neck protection in MXGP. Is it still relevant? Putting together a MotoGP factory Honda; we asked LCR Honda Crew Chief Christophe Bourguignon about the nuts and bolts of MotoGP and how a rare works RCV is built and reworked for the season.

Memories of Montjuic; a special story about the picturesque but perilous Grand Prix circuit in Barcelona’s Montjuic Park and with recollections of the speed on the streets by those that were there.