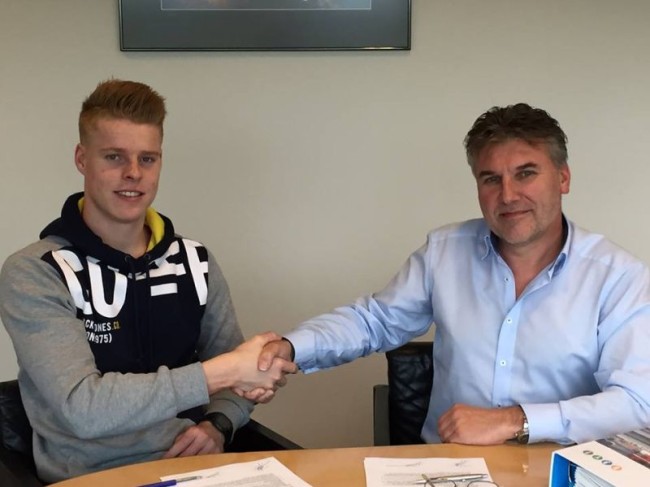 he Husqvarna SKS Racing NL Team has reached an agreement with Lars Van Berkel for the 2016 season. Van Berkel had a strong season this year with a win in the EMX250 round in Lommel and a second position in the final Dutch Open Championship MX2.

In this professional team stucture we hope he can improve himself to score the results where he is aiming for.

The plan is to ride the complete Dutch Open Championship MX2 in 2016 and when his shape is good he will race five selected Grand Prix rounds. In the open spots in the calendar he will ride Dutch Championship rounds and ADAC Masters races.

Lars will ride his first race for the team aboard a Husqvarna at the Red Bull Knock Out on the beach in Scheveningen at the end of November. Lars will try to be as fit as possible for this race because this is really tough race.

The team is aiming to continue working with Sven van der Mierden, Carsten Goedegebure and Davey Janssen for 2016. The team is in their final stages of negotiations with the riders and has a good feeling that everything will work out in the right way.

Toine Uijttewaal, teamowner of the Husqvarna SKS Racing NL Team:’’We are really happy that Lars will be riding for us next year. He had a really strong season this year and we are looking forward to work with him. Lars will bring his coach, Heikki van den Berg, with him and this is really great for our team because Heikki will also support the other team members with their training. Together with Hans Koenen and the Husqvarna machinery we have a strong base for the riders to score good results. Despite the fact that the season is just over, I can’t wait to start the new season’’.

Lars Van Berkel: ’’I’m really happy that I will be a part of such a professional team. I am satisfied about my results from this year and I will do everything I can to score as good as possible in 2016. We decided to do a few Grand Prix races instead of a full European Championship. In combination with the Dutch Open Championship, the Dutch Championship and the ADAC Masters Series we have a good calendar for 2016’’.