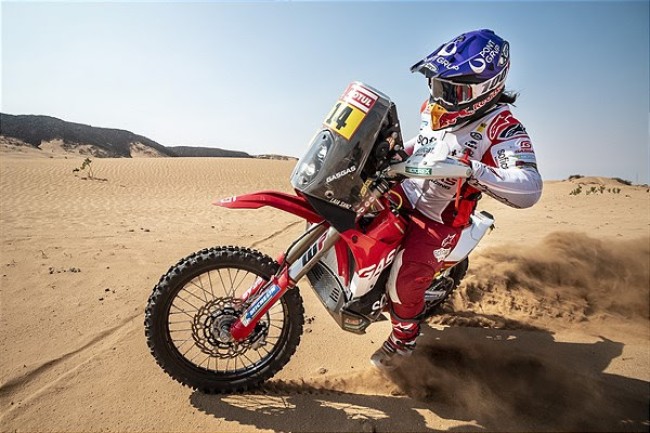 Laia Sanz and the GasGas Factory Racing team are tonight looking forward to the start of the 2020 Dakar Rally after successfully completing a pre-event shakedown and event administrative controls. Riding the all-new GasGas RC 450F, Laia will start her 10th Dakar Rally when she begins the opening 752-kilometre stage on Sunday, January 5.

Laia Sanz: “It is always an exciting time, just before the start of Dakar. We had already completed a lot of testing on the bike in Morocco in December, but it’s been good to see and ride the terrain here in Saudi Arabia. So far, my feeling on the bike has been very good. I think once the race has started, we will see lots of different styles of terrain, and for sure a really challenging Dakar. My first impressions here have been good, the country is very beautiful. To join GasGas for their new rally project is motivating, I’m so happy to be representing the brand here and throughout the season. As everyone knows, it’s really tough to finish the Dakar and my goal is to be inside the top 15. The level of riders is really high right now and I will need to be smart to have a good race. Last year I finished 12th and had great results during the 2019 racing season, so I hope to keep this momentum going into the 2020 Dakar. I feel ready, I’ve been training hard, I feel healthy and my goal is to earn a good result for GasGas on this new bike.”

The most successful female competitor at the Dakar Rally, Sanz comes into the 2020 event not only hoping to extend her 100 percent finishers record but to also claim another top-15 result. The Spaniard enjoyed a strong 2019 season including an excellent seventh place at the gruelling Silk Way Rally. Now, with the full support of GasGas Factory Racing, Laia hopes to continue her impressive run of form and successfully complete her 10th Dakar with a strong result.

Following an 11-year period of being held in South America, the 42nd Dakar Rally will see competitors face a new challenge with the event moving to Saudi Arabia for the first time in its history. The Middle Eastern country will present riders with a wide variety of terrain as they cover a total distance of more than 7,800 kilometres.

Starting in the coastal city of Jeddah, the 12-stage event will first lead riders north along the coast of the Red Sea, before returning south through the Empty Quarter and finishing in Qiddiya on January 17. With 75 percent of the race ridden in sand and with expected difficult navigation promising to truly test the riders, the 2020 race looks set to be one of the toughest yet.