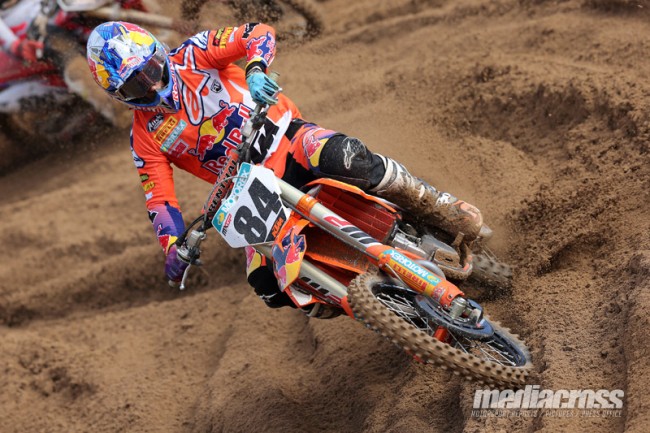 Only three weeks before the MXGP of Argentina, and this weekend there’s a last opportunity for the teams and riders to test ‘live’ during one of the pre season. Lacapelle Marival in France (50km south of Brive) will met this Sunday one of the most interesting event, as many factory teams and top riders are involved in this event.

Winner last year here (and also in 2013 and 2014) Clement Desalle will do his first race this season, and the Belgian will face strong opponents as teams Husqvarna Ice One, Yamaha Wilvo and KTM factory also select the French race to finalize their GP preparation. Back on this track where he raced the European series in 2009, Jeffrey Herlings will be one of the favourites, as well as Gautier Paulin and Max Anstie who also got podium results earlier this year. After struggling in Sardinia both Shaun Simpson (winner here in 2015) and Jeremy Seewer (runner up last year in the MX2 class) will look for good results, as well as teammate Arnaud Tonus or Kevin Strijbos who didn’t race yet this season. Jordi Tixier (second last year here), Glenn Coldenhoff, GP veteran Ken De Dycker and fellow countryman Damon Graulus will also be there, as well as a lot of fast French riders: Xavier Boog, Valentin Teillet, Nicolas Aubin and Maxime Desprey to name just a few.

In Lacapelle all the riders will do two races per class, and the fifteen best riders of each class will also enter the super final. Winner in Hawkstone Pauls Jonass will be the favourite of the MX2 class, but in France he will have more rivals than in Sardinia or UK as teams Husqvarna, Kawasaki F&H, Kawasaki Bud, Honda 114 Motorsports and Yamaha Kemea will be also behind the gate. Hunter Lawrence who already beat Pauls in Sardinia, Thomas Kjer Olsen (third last year in Lacapelle), Brits Ben Watson and Adam Sterry, Brian Hsu, Jago Geerts and Jed Beaton will be some of the guys to follow in France. In this class also many young Frenchies will be involved: Mathys Boisrame, Zach Pichon, Brian Moreau, Pierre Goupillon, Arnaud Aubin, Tom Vialle, Scotty Verhaeghe or David Herbreteau.