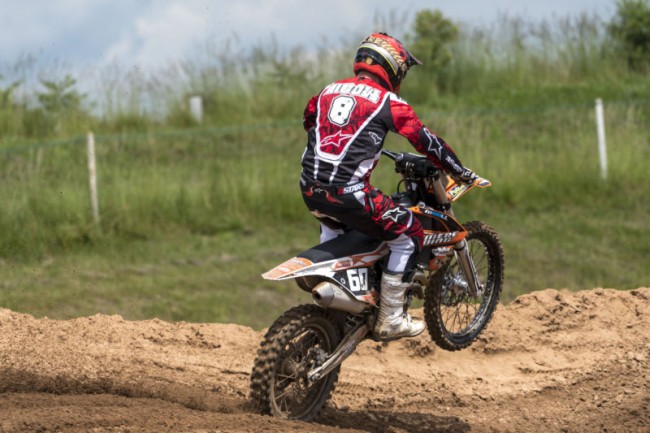 Seven-times British champion Kurt Nicoll is to make his international race debut on an Evo-class bike to represent Team England in the Vets MX des Nations motocross at Farleigh Castle in Wiltshire on September 3-4.

Nicoll, who now lives in California and works for with freestyle legend Travis Pastrana in the Nitro Circus team, has always refused to race old bikes. But he’s now bought his own 1989 Honda CR250 for his debut in the historic race event and has shipped it over to the UK. He’ll be teamed up with Neil Prince, Jamie Dobb and Ryan Voase in the event which also stars riders like Jeff Emig, Grant Langston, John Dowd, Doug Dubach, Gordon Crockard and Kurt Ljunqvist.

The 51-year old Nicoll, winner of 13 GPs and the 1994 Motocross of Nations, said: “The Vets des Nations is such a huge event, I wanted to race it for years. And I’m going there to win!”

Nicoll recently launched his Champion MX California Vacations where any rider can have a dream holiday in California on a range of the latest bikes. During his time in the UK he’ll be using one of a Mercedes-Benz Sprinter as his official race vehicle as he’s picked up backing from top van firm Tradervan – owned by ex-motocross racer Terry Minter. At the event Tradervan will reveal some exclusive money-offers to visit Nicoll’s Champion MX holidays.

Nicoll still rides weekly and remains very competitive. “I love riding – I do it as much as I possibly can and I won the 40-plus Pro class at the World Vet race at Glen Helen last year and won three Enduro-X Vet titles in the past three years,” he said.

“I’ve always ridden modern bikes, not older ones – until recently. Vets Nations organiser Dave King has been trying to talk me into doing it for five years. But I hate riding other people’s bikes – bikes I’m not too sure of. So I wanted to do it on my own bike.

“I found a CR250 out in California in good condition then I went right the way through it. But it’s 27 years old of course so I made a pledge I wouldn’t put more than 10 gallons of gas through it or else I’d be riding it all the time. As soon as I ran out of the 10 gallons, I gave it to a guy to get it shipped over!

“It is the most legal 1989 Honda CR250 that will reach that start line – I can guarantee that. But it’s good. I took it to Pro Circuit and let them dyno it and do all the work. I had a guy who used to work for Honda back them help me with the suspension. It’s a quick as they ever were back in the day.

“I’ve ridden it back to back with modern bikes. I’m slower on it but not drastically – depending on the track. On Lake Elsinore and smoother places like that I’m pretty good on it!”

“I’ve been really surprised by the reaction to me doing it – there’s been huge excitement. I understand it’s a big event and I’m taking it seriously. I’m coming over a short time before and go out with the bike in the UK and do some riding to make sure we’re ready.

“If I were to say I was going there just to have a ride around, it would be a lie! There are some damn good riders though. I ride a lot with Doug Dubach so I know how fast he goes, and John Dowd is obviously still very quick. And lots of English guys who have been taking it seriously and go very fast too.”

Check out this cool video of Kurt in action: