Kullas king of the sundown 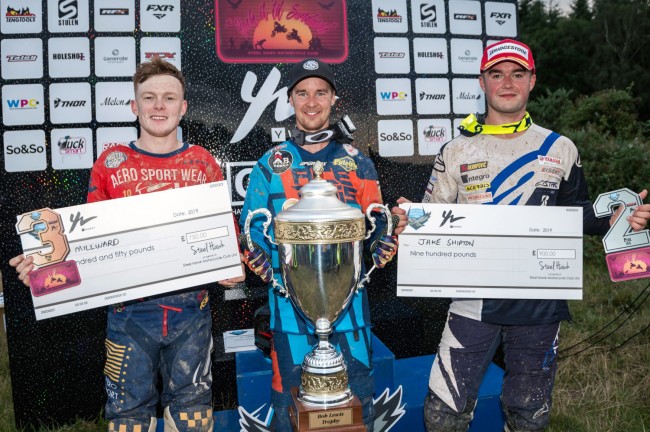 The 2nd staging of the Steel Hawk Motorcycle club’s Yworry “Rock it ‘til Sundown” Midweek Motocross Classic attracted a stacked line up of youth, Adult and Pro racers to the Tincleton venue in Dorset yesterday, with a big crowd also showing up to watch the action unfold.

Plenty of rain the day before was a godsend for the club, as with a month without the wet stuff the circuit was as dry as a bone on the Monday. With Alfie Smith and Richard Burridge on top of the track prep, and after some heavy going in the first practice sessions, the circuit soon came into its own and produced some fantastic racing throughout.

Two incidents meant some changes to the programme with the Evening final becoming the third moto for each class.

The evening programme started at 5 pm on a shortened course with the Pro qualifying followed by the finals for the daytime racers.

The Pro racers were joined by the 14 top racers from the Adult A races and it was local hero Jake Shipton who was the quickest in qualifying.  Shipton continued his speed into the first Pro heat taking the win in the 6 lap race from Liam Knight, Neville Bradshaw and Adult A winner Josh Coleman who headed home Pro Racer Jake Millward.  In heat two Lewis Tombs snatched the early lead from Lewis Trickett, but the super-smooth Harri Kullas was in front by lap three where he would stay to the end ahead of Tombs, Trickett, Lewis Hall, and Jack Brunell.

A crash in the Rookie Final halted proceedings and with the Air Ambulance called and light fading the remaining Pro Heats and Semi’s had to be cut, with it agreed by the riders that all 26 racers should go for the win in an 8 lap sprint final.

The Pace in the final was immense, and after a frantic first few bend’s it was Kullas who emerged as the leader, from Shipton who had the local crowd cheering him on. Shipton kept on the back wheel of the Estonian for the majority of the race, but with two laps to go Kullas pulled clear and onto a superb win to take the huge “Bob Lewis Trophy” and a big cash award from sponsors Yworry, and Holeshot Motocross for being the first over the holeshot line in the final. Shipton would finish second with Millward a good third ahead of the battling trio of Knight, Trickett and Bradshaw. Coleman would win the CJT Mechanical Engineering Award for the highest finishing Adult A rider from the Pro final with 11th.

The first to race off of the Mesh start gates in the daytime was the 65’s and you could write an epic the size of War and Peace to describe the drama in this class.  Freddie Gardiner pulled no punches in the opener, roaring to the head of the field by 11 seconds from Isaac Ash who put in a solid moto, but he had to fend off the hard-charging Ollie Bubb who ploughed his way through the field to pass Zane Stephens for third on the last lap. It was the same finishing order of Gardiner, Ash, Bubb, and Stephens in moto 2 with Fabian Junior Morrison and Alfie Payne also showing speed in 5th and 6th. The Third Moto would also be the final and with big prizes up for grabs and the overall still to be decided the push for the lead on the opening lap was frantic with both with the top two from the previous Moto’s, Gardiner and Ash in a big heap on the floor on the third bend.

At the front of the field, Stephens had his head down and bagged the Holeshot Motocross sponsored holeshot award and the win by a nose from the hard-charging Riley Ingram who put in every effort to take the win. Behind these two Bubb would round out his day with third with Morrison fourth, while Ash would come through the pack like a freight train to fifth as did Gardiner up to seventh.  Stephen’s as the final winner would take home a pair of wheels courtesy of Talon Engineering and a Bmx from sponsors the Stolen MX CO but the overall would go the way of Gardiner from Ash and Stephens, with them all receiving prizes from Teng Tools, Duck Smart and Racefx as did the top three in all of the other classes.

Warren Clarke was a class act in the Small Wheels taking back to Nottinghamshire a whole stash of prizes after winning each and every race. Tyler Kirby put in a good shift with three great moto’s for second overall with late entry Gus Mustoe making his presence known in third. Louis Vincent suffered a DNF in moto 2 which halted his podium chances after finishing second in his other two races.

In the Big Wheel 85’s Charlie Palmer meant business and he blitzed to three race wins, the final and the overall, although he did miss out on the Holeshot in the final which went the way of Raife Broadley who would also finish fourth overall. Jake Randall and George Hopkins battled hard all day but it was Randall who would edge the number two spot with Hopkins in third.

The Rookies class was hampered by crashes and red flags but this didn’t stop Preston Williams who was a dominant force winning the 125’s and Final. Local racers Jude Morris and Vinnie Guthrie rode well for second and third with Harvey James just a point further back in fourth.

In the 250 half of the Rookies Ben Clayton retained his title with three clear wins, with Tobias Sammut battling through for second overall with Cullen Scott third. Travis Reynolds would take the Holeshot in the final, crashing out just a few bends later, but he would win the Sportsman of the Day award for shielding a fallen rider in the final. Well done Travis!

Due to time constraints, the Adult B and Vets riders would be reduced to two motos. Daniel Hartley and Kristian Barry couldn’t be separated on points with each rider taking a win and a second but it was Hartley with the win in the final moto who would take the top spot from Barry. Luke Pritchard would round out the top 3.

Chris Brown would take the Vets overall from Stephen Elford who won the final moto and in doing so wins himself a pair of TCX boots courtesy of sponsors Nevis Marketing. Kevin Sanders would finish third overall.
The Adult A class saw the fastest 35 from qualifying going at it to qualify through to the Pro’s and to win the Prize money on offer. Josh Coleman was on fire and cleared off in both motos, going 1-1 for the overall.  Adam Collings came through the two motos with a 2-3 scorecard for second overall with Joe Clayton in third ahead of Ryan Butler, Jake Parker and Josh Turner with Jamie Dixon taking the Holeshot Motocross Award.
Other awards were put up from FXR, Thor, Generate Products, Bel-Ray, Melon Optics, Jim Jam Designs and local MX legend Badger Goss who awarded the “Bad Ass Badger Award” to Jensen Lewis.

Steel Hawk Motorcycle club would like to thank Jason Lewis and his family for believing in our vision and sponsoring the event through Yworry and CJT, and everyone else who supported and helped us put on this event.
Keep your eyes peeled for our future plans.
The complete set of results can be found via https://speedhive.mylaps.com/Events/1702613