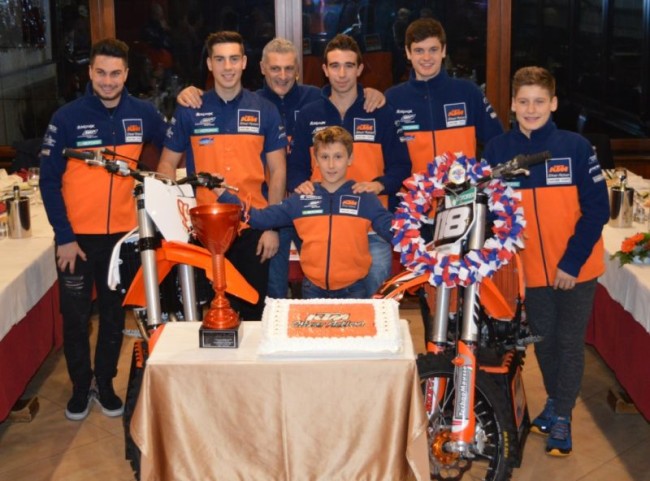 News and confirmation are the main ingredients of the new team, which enshrine the commitment of Silver Action both in the MX2 World Championship, as the European Championships as well as in the various National Championships.

As always we focused in giving consistency to a young riders Team that is prepared to face an arduous racing season.

Let’s start with the Team new entry: this is Davide Bonini, twenty years old, from Ranco (VA), riding the KTM SX‐F250, he will take part in the MX2 World Championship. Bonini, already Italian Champion of Motocross and Supercross, last year he showed good rhythm and speed in the World MX2, especially in the Czech Republic Grand
Prix. Running with a historic Team like Silver Action, which a regular longtime participant at the highest World Motocross Competitions, Davide is confident he can aspire to such results steadily.

Still in view of the World Championship races , KTM Silver Action Team is continuing to give technical support also to Amandine Verstappen: back from encouraging results obtained in the women’s World Championship 2016, Amandine will try to aim for the top positions of the standings; despite the injury suffered Amandine has always
worked to give the maximum in the held races. A legitimate desire of revenge that will take Amandine to fight even more strongly.

Riders who instead will represent the Silver Action Team in the European Championship 250cc will be three, all confirmations: Davide Cislaghi, who brightly ended 2015 in sixth place overall in the European 125cc, and in 2016 he ran as a wild card in a few races in World MX2; Nicola Bertuzzi, who for the first time will compete with a full season in the European 250cc and Yuri Quarti, he with the change of category from 125cc 2t to 250cc 4t.

For the young rider Andrea Bonacorsi, who was also reconfirmed among the ranks of the Team, it will be a very important year. Having regard to his remarkable performance in the class 85cc, Andrea in agreement with the team, decided to switch category one year earlier than expected. The jump to 125cc will occur firstly in the
National Championships and later the European Championship in Italian trials.

Moreover all the team’s riders, except for Verstappen, will be at the starting gate for the International of Italy and the Italian Motocross Championship. Ultimately a young Team ready for the challenges of the races, which confirms the desire of the Silver Action to always bet above all on the new generation, the driving force in this
exciting but strenuous sport.

Mirko Madaschi , the Team manager, said: We are coming off a 2016 season quite positive, even if we lacked the confirmation that with Stephen Rubini, he could have bring us the title of European Champion 125cc. Unfortunately the injury suffered by Stephen has really deprived us of the ability to compete, so many times
shown in a lot of races.
We are expecting a difficult racing season, but with the experience and knowledge that we have built a very competitive team of riders, obviously along with the right mix of passion, training and discipline I hope will lead us to the top positions.
With this new and young line‐up we believe that we can handle with the best outlook and results next 2017 season.

Appointment is set for early next year with the start‐up competitions of the International of Italy, which as usual will start the Motocross Season in perspective later for the World Cup.