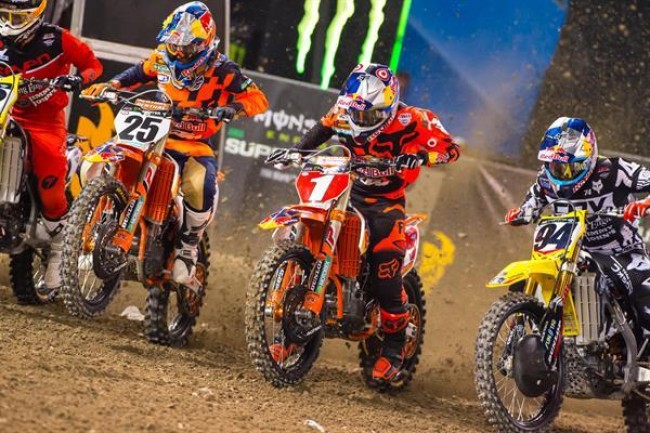 Marvin Musquin, who is contesting his first season in the senior 450-class Supercross, has been steadily improving as the contest progresses and on Saturday picked up his third consecutive podium and his fourth for the 2016 season on the KTM 450 SX-F FACTORY EDITION.

After qualifying third and fifth place respectively, both Musquin and Ryan Dungey lined up in 450SX Heat 2. Musquin got the jump off the start but Dungey and Trey Canard were out front on the opening lap. Despite a hard charge by the Red Bull KTM factory riders, Canard took the heat race win, with Dungey in second and Musquin ultimately securing a fourth-place transfer to the Main Event.

Main Event
In the 450SX Main Event, Dungey grabbed a top-three position off the start, where he battled with Eli Tomac for several laps before making the pass into second. From there, the championship leader went on the chase after Ken Roczen in the lead but with about six laps to go, he slid out and a hard-charging Musquin advanced into second place.

Meanwhile Musquin began the 450SX main just inside the top five but the French rider was quick to advance up to third behind his teammate before he ultimately moved up to second with six laps remaining. Musquin got on the gas and went on to claim his third consecutive podium of the season and his fourth career podium in the 450SX class.

“It feels great to be on the podium again,” said Musquin. “To be able to pass a guy like Tomac and pull away was really good. I fought hard and I’m really happy with the way we worked tonight.”

Dungey went on to fight hard to for the final podium spot but in the process picked up 26th career podium and his tenth consecutive podium finish in 2016. This milestone gives the reigning 450SX Champion the all-time record for career podium finishes, just one ahead of Chad Reed.

“Overall it was a good night,” Dungey stated. “The track was tough tonight and I was pushing really hard trying to catch Ken (Roczen) and I slid out. I just have to keep plugging away, that’s what we’re going for.”

Troy Lee Designs Red Bull KTM’s Justin Hill wins in Toronto
Justin Hill has steadily made his way to the top of the results and at the third round of the Eastern Regional 250SX class he grabbed his second career win inside Rogers Centre. With his solid performances so far this year, Hill is second in the standings just two points out of the lead.

Since the start of the season, Hill has shown he’s got the speed to be at the front. It didn’t take long for that speed to hit a peak in Toronto, earning the fastest qualifier, taking second in his heat before leading nearly every lap of the main event.

“I had a lot of confidence coming into the main after getting the top qualifier and finishing second in the heat,” said Hill. “The bike was running awesome and I’m really happy to be in contention with the championship. I couldn’t be happier.”

Joining Hill at the front of the pack was Alex Frye. After a tough go of it last weekend in Daytona, Frye bounced back in a big way. He started in the top five and kept his KTM 250 SX-F FACTORY EDITION at the front, eventually bringing home a season-best finish of fourth.

Shane McElrath‘s luck in the main events continued to fair on the bad side after a great run at the front was cut short due to a flat tire. An unusual issue during a main event, and eventually was credited with 18th.

Next weekend the fourth round takes the racers to Motor City as the series takes over Ford Field in Detroit, Michigan.