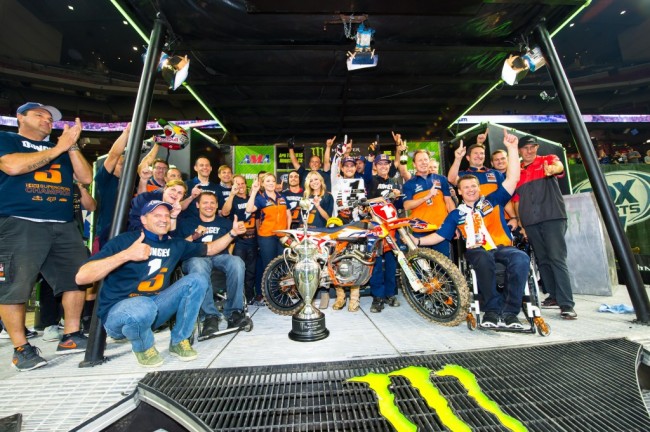 Murrieta, CA – KTM Motorsports is excited to announce that it has extended its contract with Red Bull KTM Factory rider, and the newly crowned 2015 450 Supercross Champion, Ryan Dungey through 2017.

“I’m extremely happy that Ryan has chosen to commit another two years to the Red Bull KTM team,” explains Red Bull KTM Team Manager Roger De Coster. “I have worked with Ryan for many years and can honestly say he’s is in the best shape of his career right now. The level of commitment he has shown to his training program in Florida, our race team and toward the development of the KTM 450 SX-F race bike has made him a better racer showcasing his full potential. I trust he will continue performing at this level for several more years and the team and I will continue to strive to give Ryan the best possible equipment and the support he deserves.”

Dungey is equally happy to re-sign with the KTM brand, stating, “I have never had a manufacturer work so closely with the racing team to make sure we have the best bike each year. The proof of how great the bike has become is written in the race results. I couldn’t ask for a better team and manufacturer to work for.”

Ryan Dungey will continue to race in the 450 Supercross and Motocross classes for the 2016 and 2017 race seasons aboard a Red Bull KTM Factory race machine.