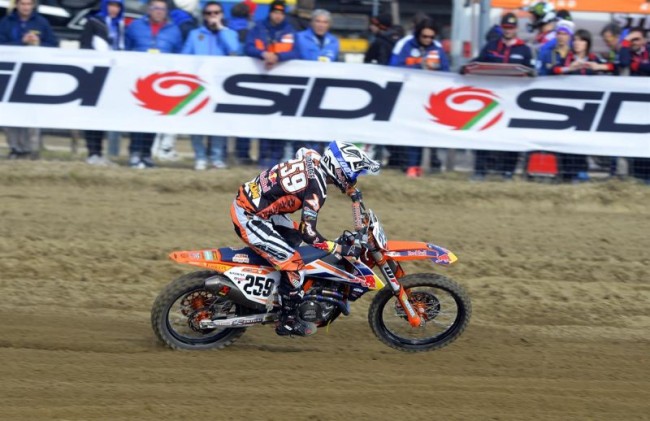 Italian International MX Championship 2016
The three-round Italian series is popular with riders carrying out their pre-season preparations in advance of the opening round of the MXGP and MX2 World Championship in Qatar on February 27.

Glenn Coldenhoff finished fourth in the MX1 race and fifth in the Elite Class, which combines the best MX1 and MX2 riders in one final race on the program. His teammate, multi-world champion Tony Cairoli had to sit out the series at home in Italy after an injury to his ribs during pre-season tests. He is currently engaged in concentrated treatment to be ready for the season opener at the end of the month.

After the races Coldenhoff said he had been struggling with arm pump. “It doesn’t go so well for me at the moment because of the arm pump. I can’t ride like I want to and the speed is not good enough, but we have been using these last two weekends as testing. Today was a fun track with some nice jumps and waves so it was perfect for trying some things on the setup. We’ve already made some big steps in the right direction with the bike but we’re not there yet. We still have three weeks before Qatar so we still have some time. We have a good base and now we’re just doing some fine-tuning, and trying to solve the problem on my arm pump. I have great people around me and I believe in the team and for sure we will be ready in time”

The factory team’s MX2 duo of Jeffrey Herlingsand Davy Pootjes did not compete in round two. Herlings won the MX2 class on the opening round but the two riders competed in the British Hawkstone International MX this weekend.

Hawkstone International MX 2016
Herlings underlined that he is back in the business of winning races in these pre-season events and after two MX2 moto victories also went on to win the Superfinal to put his KTM 250 SX-F well ahead of the bigger 450 racing bikes. British rider Shaun Simpson, a fully supported KTM rider, was second to Herlings in the Superfinal.

KTM MX2 Team Manager Dirk Gruebel: “Jeffrey went really well today and had two convincing wins in the MX2 class. He was also impressive in the Superfinal and finished ahead of the 450s by about seven seconds. Davy also rode well in the first race and had a good battle with Ben Watson but in the second race he got stuck behind Jeremy Seewer and finished 4th. Today was very tough. It rained in the morning and it was muddy and it was also very hard on the bikes.”

Herlings’ victory in the MX2 and his impressive win in the Superfinal shows he has worked hard to prepare for the 2016 season after being sidelined through injury in 2015. Pootjes came away with a 2-4 moto result to be second overall in the MX2 class.

While Coldenhoff will race in the final round in Italy next weekend, Herlings and Pootjes plan to compete next weekend at the Valence International MX in France to continue their pre-season race warm-up ahead of the first round of the 2016 MXGP and MX2 World Championship.